More than the thermometer is heating up due to the triple-digit temperatures early in the week. Kansas wheat producers are in the cab and cutting now across a wide swath of the state, battling short, thin stands as they work to maximize the bushels delivered to the elevator. Quality continues to be a welcome positive note, with protein reflecting drought stress and test weights heavy.

“Moisture has been pretty dry; the hot winds took care of that,” said Levi Benjamin, who leads the Bucklin branch of Offerle Coop Grain & Supply Co.

With no rain in the forecast, he expects harvest to go quick in Edwards County. Bucklin took in the first load of wheat on Monday, taking 40,000 bushels thus far. Moisture has been around 9 percent. Protein has been pretty variable, ranging from 10.5 to 14 percent. Test weights are averaging a little over 60 pounds per bushel, thanks to a couple of inches of rain that arrived too late to help yields but did improve ending quality.

Benjamin noted the wheat is coming in first from continuous wheat fields, which producers expected to be a disaster after the area did not receive any moisture to speak of all late fall and winter.

“I always say, we grow better wheat in a dry year,” said Sumner County farmer Tim Turek. “We needed just one rain, and we would’ve hit it. But that was the one we missed.”

Turek was harvesting 40 bushel-per-acre wheat on Wednesday south of Wellington, which he said, “isn’t bad for as thin as it is.” At the end of March, that field looked like it was going to yield 20 bushels better, but it didn’t rain when the wheat was heading. The rain did come during grain fill, which helped finish off the wheat.

The field of AP EverRock, planted after corn, will be saved for seed wheat. Forty bushels per acre will likely be Turek’s farm average this year, although the wheat planted behind soybeans is not looking as good.

Harvest started for Turek on June 12, but it will go faster than most with the short, thin wheat, expecting to finish up in about two weeks. Despite the weather challenges that are limiting yield, the quality is excellent. Test weights are averaging 60 pounds per bushel and better, and proteins are ranging from 11.5 percent up to 14 percent.

His daughter Paige just came back to join him last fall as the fifth generation on the farm. With a lot of acres of wheat to cut between Tim, his brother and his father, they have a custom cutter who will be arriving at the end of this week to help them wrap up harvest. Farmers in Kingman and Sedgwick counties are also waiting for custom crews, with about half still to arrive. Some farmers have opted to harvest their own wheat, however, due to the extreme increases in fuel costs.

Even with the wait, all 10 locations of Garden Plain Co-op received wheat by June 13, having taken in the first load just two days earlier around the Belmont location, according to Shawn Talkington, operations manager.

Area yields are expected to average below the five-year average, depending on location and how much rainfall they received. Test weights are averaging above 62 pounds per bushel, and proteins are north of 13 percent for many loads. Talkington said the straw height is very short, noting that in about half the territory the wheat is only boot high.

SY Rugged has been a good variety, yielding up to 10 bushels per acre above other varieties. Double-cropped wheat is yielding 10 bushels less than fallow fields. CoAxium varieties have also been great for the area, controlling rye and making a noticeable decrease in dockage.

Although yields are down this year, acres were up, so they are expecting to bring in about five million bushels, which would be close to their five-year average. By the end of the day Tuesday, they were about 10 percent of the way done. “As far as our ability to grow a crop here, wheat is the best choice,” stated Talkington, citing the adage that wheat has nine lives, and this growing season has used most of them. 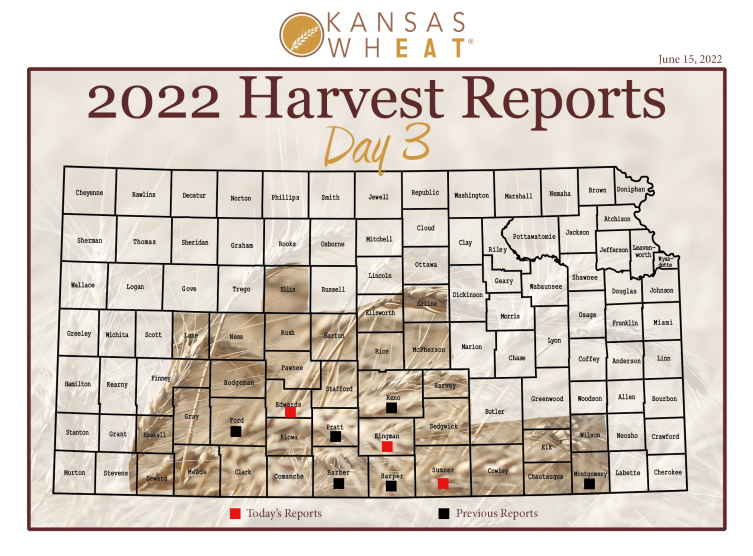