Many Kansas farm families spent Father’s Day working together in the field as test cutting expanded across Kansas over the weekend. With conditions remaining hot and dry, farmers are anxious to get harvest going into full swing.

Paul Penner started cutting on Friday near Hillsboro in Marion County. He is seeing a little winterkill in areas, but the bigger issue was excess moisture in May that led to increased disease pressure. Compounding the issue, the extreme hot weather caused white caps to appear, which has made some fields difficult to thresh.

Despite these disappointments, Penner said harvest will be comparable to average with yields between 45 and 70 bushels per acre, protein between 10 and 11 percent and test weights as high as 63 pounds per bushel. A nearby field of Bob Dole - a variety developed by Kansas State University and released by AgriPro/Syngenta - topped the range at 70 bushels per acre with very good test weight.

Dara Prescott, who farms near Ellinwood, started cutting last Wednesday - one of the earlier folks to start harvest in Barton County and haul into the nearby  Bartlett Grain Company shuttle-loading facility. South of Cheyenne Bottoms, wheat yields are coming in from 40 to 55 bushels per acre. Unfortunately, however, part of her area was hit by a hailstorm in mid-May that caused significant damage. In affected fields, Prescott reported yields are averaging in the 30 bushel-per-acre range.

Overall, Prescott expects an average wheat harvest this year - not great, but not terrible either. This year’s wheat was planted into drought conditions, caught a few small rains, but then have remained dry into harvest.

The dry conditions are also hindering progress for Randy Small, who farms near Neodesha in Wilson County. Normally, someone on his farm crew would be chasing the combine through the field with a planter to put in soybeans, but this year has been too dry to double crop.

While harvest has been relatively uneventful, this year’s wheat crop was hampered by a mix of freeze damage, drought and disease pressure. A few individual fields in the area have tested for vomitoxin, but not at levels high enough for elevators to turn loads away. Disease pressure on the flag leaf significantly reduced yields with the top third of the heads not filling well.

Still, Small reported yields are averaging 50 to 60 bushels per acre and test weights steady at 60 to 61 pounds per bushel. Even with some green stems, moisture content is around 12 to 13 percent.

On one side of the driveway to the farm’s headquarters office, a field of Zenda — a Kansas Wheat Alliance variety — has been a particular standout. The field was planted late into soybean stubble and had no fungicide or additional fertilizer applications, but looked phenomenal after receiving moisture in late winter and yielded around 60 bushels per acre. 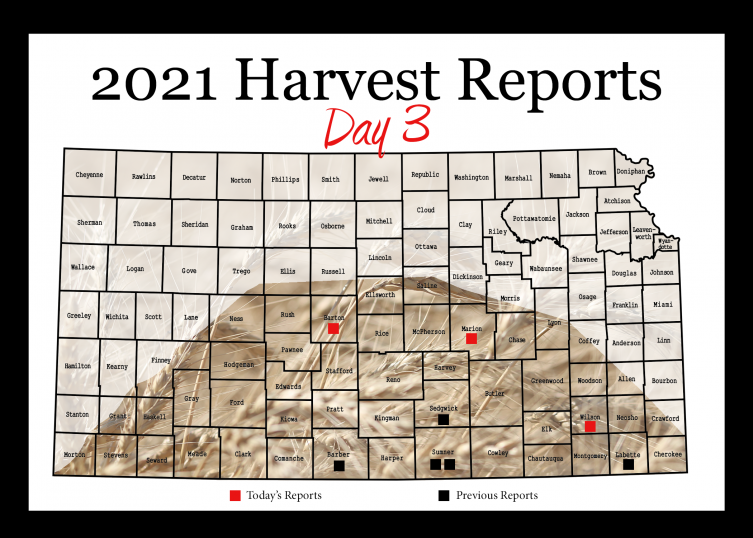