After battling Mother Nature’s sprinkler for the last few weeks, wheat harvest has almost drawn to a close for 2016, a relief for many farmers across the state. According to the USDA National Agricultural Statistics Service, 98 percent of the crop has been harvested statewide.

This year’s bounty has surpassed nearly everyone’s expectations, with last week’s USDA estimate of a 454 billion bushel crop. This is the sixth largest harvest on record for Kansas.

Kurt Anderson, manager of the Decatur Coop Association in Decatur, said that he expects to be wrapped up by the end of the week.

“This has just been an extraordinary harvest,” said Anderson. “I think it’s going to turn out to be a once in a lifetime harvest for most of these guys.”

The last few days farmers have seen high humidity in the early mornings which made chewing through those last few acres a drawn out process for some farmers. Anderson reported that most producers in his area applied fungicides.

“Last year everyone who didn’t apply fungicides got burned so badly that everyone and their dog did it this year,” said Anderson.

Larry Bell, manager of the Frontier Ag, Inc. location in Morland, said that this year has been an “unbelievable” harvest for his farmers, but it’s also been a marathon harvest for some of them. Some continuous wheat acres have seen yields averaging in the upper 70 bushels an acre, and even some hail damaged wheat averaged in the mid-60s.

“It didn’t take too long for our location to fill up and to start some wheat ground piles,” said Bell. “It’s one of the largest harvests I’ve seen in my 20 years of experience.”

Bruce Williams, manager of Rangeland Cooperatives in Phillipsburg, said that they only have around one or two people finishing up at most of their locations. Harvest has also lasted longer than Williams expected; in fact, it’s one of the longest harvests that he remembers.

Yields have been good for the area, averaging in the high 50s-lower 60 bushels an acre. Lots of rain in the area meant that area test weights “dropped pretty hard,” and final post-rain test weights are averaging 56 pounds per bushel. While test weights dropped toward the end of harvest, Williams said that proteins have started to increase and he estimates that average will end up at around 11.4 percent. 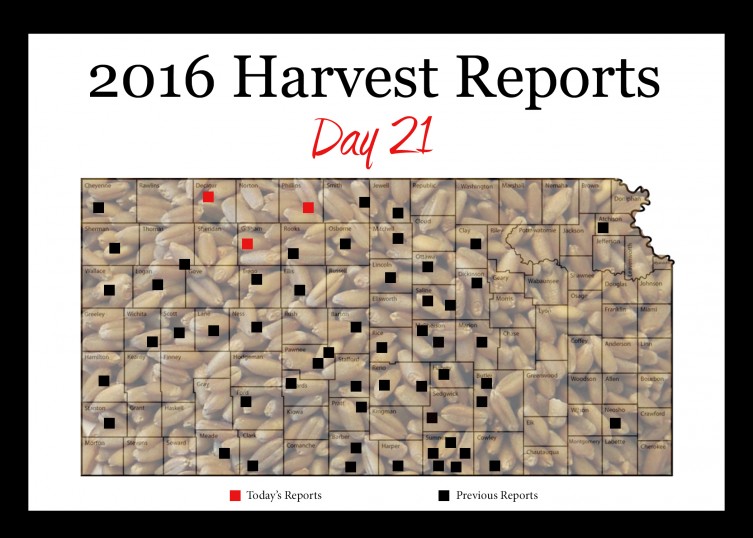