What was expected to be a sprint of a wheat harvest has now turned into a full blown marathon. Last week brought rain delays across the western and central regions of the state, which have slowed harvest crews and lowered test weights. Now harvest is feeling nice and toasty again with hot, dry weather and warm winds across the state.

Brian Linin from Goodland, Kansas, reports that it has been dry and windy the last couple of days, so they've finally been able to get a strong start to their harvest. They began late Friday and have about four more days of cutting left. Proteins in the area are averaging in the 11s and yields have been in the 60-80s, even with some hail damage.

Although this year's harvest has had a late start and there's still a lot of wheat in the area to cut, Linin says it has been way better than the past few years. He estimates that if the strong, hot winds continue, a lot of the wheat that's left will be cut by the end of the week.

Theron Haresnape, a farmer from Lebanon, Kansas, reported that he finished up harvest late last week. He estimated that harvest completion is 98 percent in the eastern portion of Smith County, while the western is hovering around 85 percent. Haresnape said that his average was just under 70 bushels an acre, a number that almost doubles his average from last year.

Test weights for Haresnape ended up running at 59 pounds per bushel after the rains, and protein content was lower than average. He also reported that farmers who had disease susceptible wheat varieties and hadn’t applied fungicide were seeing a dramatic decrease in yield and quality. He expects that the area will see more acres of WB-Grainfield next year due to its high performance in the area. 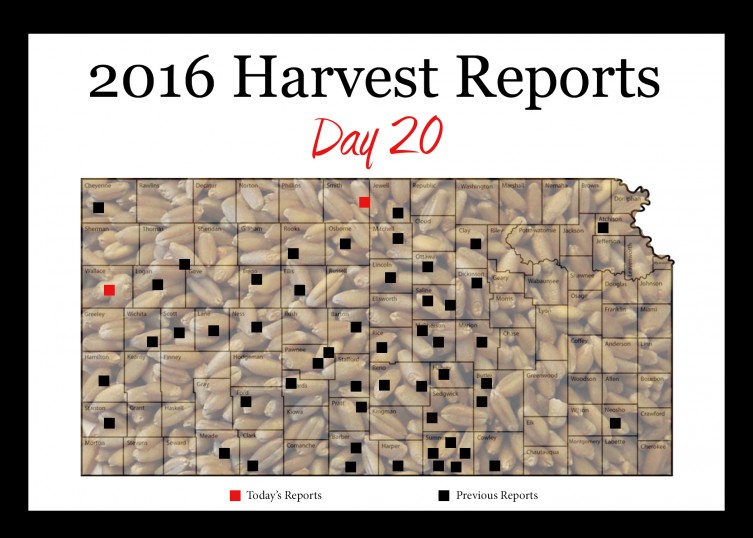