Rain has been the topic at hand for many Kansas wheat farmers. On Tuesday the USDA National Agricultural Statistics Service estimated 79 percent harvest completion, but many farmers in the western portion of the state are considering rigging up headers to airboats.

Doug Ross, manager of the St. Francis Equity Exchange, said that harvest started in the area on the June 23. So far rains have made it difficult to get the harvest machines rolling full force for long periods of time.

Taylor Myers, manager at the Wakeeney branch of Frontier Ag, Inc., said that his area is around 85-90 percent harvested. Farmers have seen a wide range of yields, but many are reporting averages around 70 bushels per acre. Wakeeney has also received some rain, which has pushed the finish line for the area back a few days.

Test weights, even after the rainfall, average 61.5 pounds per bushel for the area while protein content has averaged around 11 percent.

Kris Williams, manager of the Randall Farmers Coop Union in Randall, said that even after the smidge of rain the area received this weekend, harvest is around 95 percent complete. Harvest picked up in the area on June 16, and things have run fairly smoothly ever since.

Yields in the area are ranging 50-70 bushels an acre, “way, way, way above the averages from the last several years,” said Williams. Test weights have averaged around 61 pounds per bushel and proteins have averaged 11.4 percent. 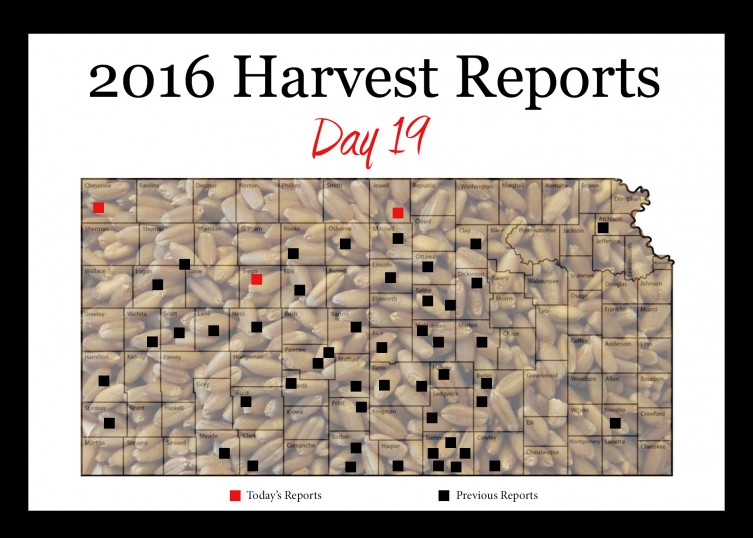