Southwest Kansas received rain and storms overnight, ranging from 40 to 60 hundredths of precipitation, which kept combines out of the fields until early afternoon on Wednesday. With windy conditions and temperatures in the low to mid nineties, the wheat dried out quickly and farmers were anxious to get rolling on Wednesday.

David and Lisa Schemm who farm in Wallace and Logan Counties, reported that they are about 40% done with their harvest. Yields have been averaging from the 50s to 70s on the majority of their fields so far, test weights have been really good, and proteins have been highly variable, ranging from below average to excellent on different fields.

Schemm reports that his wheat looks “phenomenal” this year. “This is probably one of the best years we've had since I came back to farm which was in the early 90s.” One of his top yielding varieties is KanMark, which was released by Kansas State University in 2014.

The Horton family, who farm and produce seed wheat in Wichita and Kearny Counties report excellent yields this year as well. Joe, a new hard white wheat from KSU, yielded over 100 bushels per acre for the Hortons. This year is better than the past few for the Hortons and other farmers in the area.

“This year is a year of exceptions,” said Alec Horton. “It's not going to be a normal year by any means,  but it’s not a year that couldn’t happen again, if you manage everything correctly.”

“We’re finally starting to see these new technologies and things we’ve done starting to pay off,” Rick Horton added. “It’s not going to happen every year, but we’ve seen that this is what we can do. You can be profitable growing wheat.”

Steve Badger of Frontier Ag in Oakley reports that harvest began for them on June 17, but they really got started the week of June 20. He estimates that they are 50-75% complete in the area. Yields have gone as high as the 80s, but he estimates that the average is in the area of 50-60 bushels per acre.

Badger said proteins are highly variable, but it seems that the protein levels are actually increasing as harvest progresses. With some rain Tuesday night and rains in the forecast over the next several days, harvest will likely continue past the 4th of July. Test weights have decreased slightly after Tuesday night’s rain, but are still above 60 pounds per bushel.

He reports that a lot of acres were sprayed with fungicides, with pilots spraying more acres this year that they ever have. This may be due to the fact that there was a lot of wheat streak mosaic in the area last year, when yields averaged only 35-40 bushels per acre. 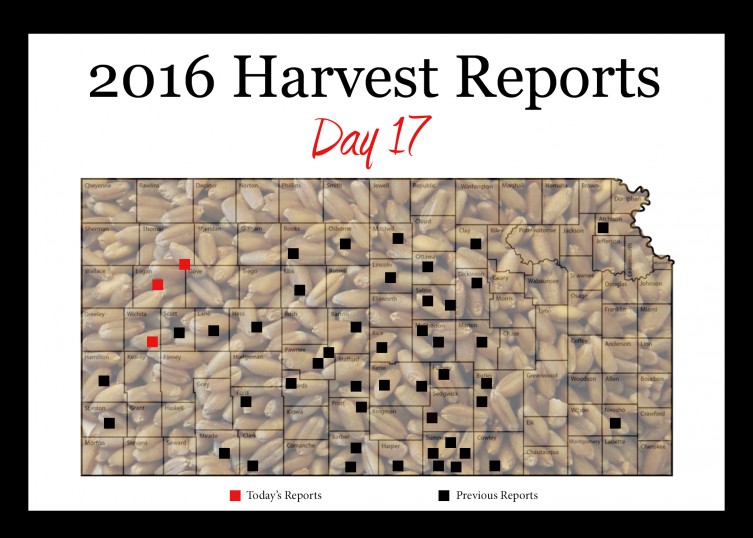