The Kansas wheat harvest has been longer and more interrupted than normal, but farmers in the far west and northwestern portions of the state are finally down to the last few days of cutting. This year’s crop has been characterized by high variability in just about every category, but once again, farmers in America’s breadbasket can be proud their crop will help supply end-users and feed consumers around the world.

Rick Horton, who farms near Leoti, finished up wheat harvest on Wednesday night in Wichita County. Horton produces certified seed wheat and also provides agronomic services. He is also a multi-year champion from the National Wheat Foundation (NWF), hosted a National Wheat Yield Contest, so he pays close attention to the crop.

Horton explained his operation sets a yield goal, then selects varieties and determines ideal population rates for each varieties’ specific characteristics — the number of tillers the variety will produce, the amount of grain that variety will put into the head, etc. Then, he fertilizes to meet that yield, typically around 2.4 pounds of nitrogen per bushel of yield — which should maintain 12 percent protein — including residual and carryover nitrogen.

“Then we apply fungicide and let Mother Nature and God do the rest,” Horton said.

As a whole, he reported this year’s crop is above average for area producers, even though harvest lasted for three weeks — much longer than normal. Yields ended up better than average — around 85 to 90 bushels per acre — but Horton said that is still a little disappointing from how his crop looked around the first of June when the triple-digit weather showed up and hampered that last bit of yield gain.

“We saw a lot of variability and saw a lot of things that didn’t make sense,” Horton said. “But we still cut a lot of good wheat.”

While the area saw some scattered instances of wheat streak mosaic virus, Horton said the major issue in his part of western Kansas was the pressure from scab. Farmers there are not used to dealing with scab. But with an increase in corn acres, enough inoculum has accumulated in the soil that scab is now being seeing seen more widely, not just behind corn stalks. Depending on the variety, loss from scab varied from five to seven percent up to 30 percent.

“It’s something new for western Kansas and it’s something we’re just going to have to deal with,” Horton said. “It’s a fickle thing to figure out and manage around.”

Brian Linin, who farms near Goodland, still has several days to go before harvest is complete. He is about halfway done with his wheat harvest and hopes to finish up Friday and move to his fields in Colorado.

He is pleased with this year’s harvest, with yields averaging in the upper 70 bushels per acre; however, he reports test weights have been a challenge because of the wet period in May followed by a dry and extremely hot period. Test weights are ranging from the mid to upper 50s.

He noted his operation put on an additional 30 pounds of nitrogen when they had the fungicide flown on, helping boost protein levels.

“Proteins have been awesome, ranging from 13 to 14 percent,” Linen said. “But we put a lot into this crop.”

Linin reported hail and wheat streak mosaic virus have been the major issues this year. One of his fields was a 50 percent loss with mosaic all the way across the field. Hail damage also caused up to 50 percent loss in a field.

“With all the thunderstorms we had, we’re lucky we didn’t have more hail damage,” Linin said. “It looked like it was going to hail a lot.”

He noted although acres are down in the area, bushels will be up, stating that this year is “not even comparable to last year.”

Mike McClellan, who farms near Plainville, was down to his last 70 acres of wheat to harvest on Thursday afternoon, but high humidity levels were making it tough to finish. He started harvest in Rooks County on July 3, the latest he ever remembers starting, and has been cutting since then.

McClellan reported his wheat looked better from the road, but harvest is still turning out pretty well. Yields are all over the board — from the mid-40s to the mid-60s — with earlier planted wheat yielding more. Moisture levels started around 9 percent before mid-harvest rains and now are averaging around 12 percent.

Test weights suffered this year with the high-end hitting 59 pounds per bushel, but other fields stretching into the lower 50s due to wheat stands going down following windstorms and other stressors.

McClellan’s protein levels, however, are excellent, ranging from 12.5 to 16 percent. He said this is the second year he is bagging wheat, noting it is nice not to have to truck wheat to town. Instead, the grain cart unloads directly into the bagger on the edge of the field, where it will wait for post-harvest delivery. He said he has already contracted some of that wheat to end-users and will work with a broker to sell the rest.

McClellan has 500 acres of spring wheat this year that he planted in the first part of April. That wheat will be ready soon and will also be bagged and sold for post-harvest delivery.

Overall, harvest has been long, but he said it will end up about 10 percent above average.

“I wish we could get done and drink a beer and think about getting ready for spring wheat,” McClellan said. “Maybe more than one.” 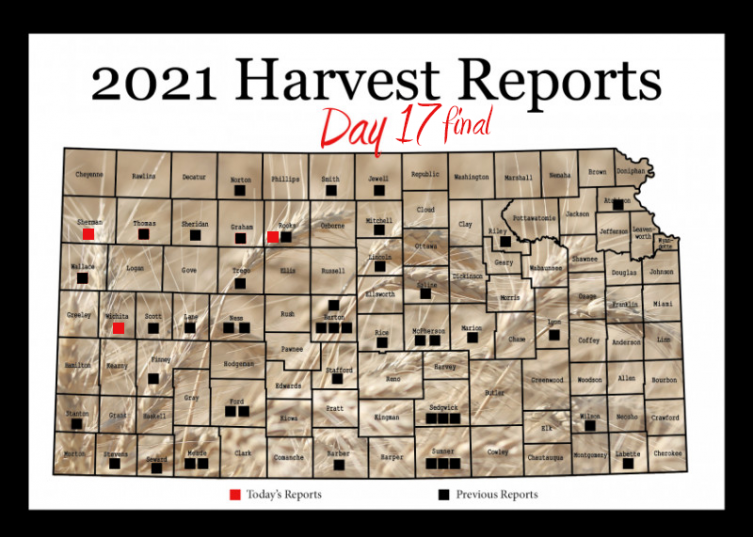