According to the USDA's National Agricultural Statistics Service, for the week ending July 12, 2020, Kansas winter wheat harvested was 95%, well ahead of 75% last year, and ahead of 90% for the five-year average.

Erik Lange, Senior Vice President and chief operating officer for MKC, says this year’s bushel intake was down slightly, but it was also what they expected. Early on they had expected a little less than normal, but they were fortunate enough to have great grain fill conditions in late spring and early summer. This helped offset the freeze damage and other things. Harvest this year started about a week and a half later than normal.

South Central was one of the bright spots. Sumner, Sedgwick and Harper counties produced good test weights. Proteins were average or slightly below average, about 10 ½ to 11%.

Central counties were a little lower quality than South Central. They had hot, dry weather late in the filling season, which hurt the test weight a bit. There was also a much-needed rain that came through, but it hurt the crop at the same time. Test weights were averaging 59 ½ pounds per bushel, making it slightly below average. Protein levels were in the range of 9 to 13 ½%.

Lange reported that North and South Central regions are about 99% done with harvest. The Rice County area, at the west end of the trade territory, had a couple rain events, and they are still waiting to finish cutting some mud holes.

Dell Princ, manager of Midway Coop in Osborne County, reported that harvest began on June 18, which was on time. This area took a hit this year with bushels down to 63% of last year due to freeze damage in the spring.

He said the wheat in the southern part of the territory was the best during harvest, but as time went on and harvest moved north, the wheat began to drop in condition. Overall yields averaged 35 to 40 bushels per acre. In the southern counties they were bringing in 70 bushel wheat, due to great weather conditions and good harvest. The northern counties harvested 15-30 bushels per acre, stemming back to the spring where they were faced harsh weather and freeze damage.

Protein levels were ranging anywhere from upper 11s to upper 12s, with about 98% of harvest finished. This year’s final numbers were below average compared to the outstanding numbers from last year.

Jeanne Falk Jones, Multi-County Specialist in K-State’s Northwest Research-Extension Center, reported that this year’s crop had a lot of variability, and trying to get the wheat crop established and going last fall was a little harder than anticipated. In Northwest Kansas, the wheat crop took one of the larger hits this year in terms of establishing a stand and also when it came to getting seeds into the ground.

“We just really struggled last fall with getting wheat into the ground. It was almost like there was a line on the calendar to draw the first week of October, for trying to get a good stand,” she said.

The spring weather during the beginning of April brought in cold temperatures that slowed some of the wheat down. Another event that took a toll on the wheat was during the middle of April. This year larger, more developed wheat was able to hold some more heat down in the bottom, helping it survive the cold spells in April. The smaller wheat took it harder, slowing development anywhere from a couple of days to a couple of weeks.

“Those two cold events were sure defining parts in the wheat development this spring,” she said.

Harvest this year in some cases has already come to an end thanks to great harvest conditions and no rain. They are anywhere from completely done to a week in a half until they are finished, with variability across.

Yields and test weights have been all over the board. Yields are ranging from 25-30 bushels per acre all the way up to 60 bushels. This year the crop did not have the support from Mother Nature to become established like it usually would. Some farmers are feeling good with their averages as they look back at the weather they faced. Due to heavy winds for 5-8 days, test weights were showing anywhere from low 50s up to 60 pounds. Protein levels are overall higher compared to other years, ranging from below 10% to 14%.

The 2020 Harvest Report is brought to you by the Kansas Wheat Commission, Kansas Association of Wheat Growers and the Kansas Grain and Feed Association. 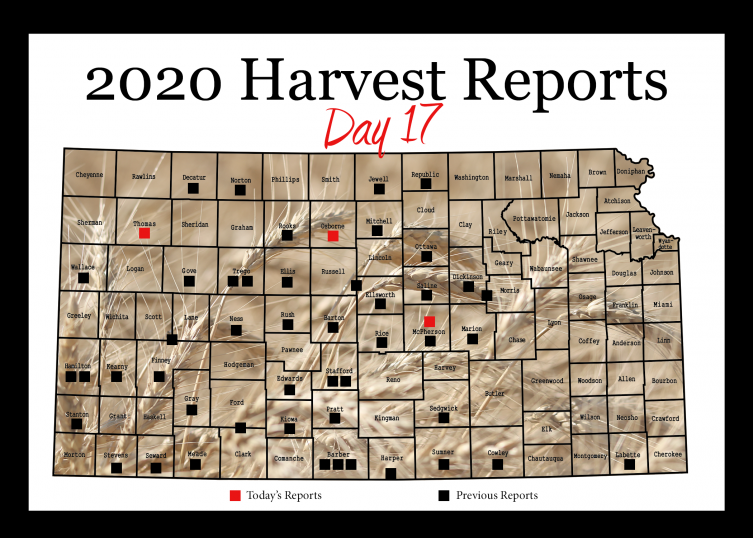