Kansas producers are wrapping up their harvest in far western counties, while farmers wait out humidity to continue cutting in the north-central region.

Adrian Polansky has been harvesting since June 28 in Republic County near Cuba, a few days later than normal. Polansky Seed, Inc. has about half their wheat out of the field, and he estimates at least another week left of cutting, depending on rain.

He is happy with this year’s crop, averaging 75 bushels per acre. Polansky is happy with the decision he made in the 1980s to spray fungicide. He notes the practice is paying off with beautiful, picturesque wheat fields.

Varieties planted included Polansky Seed’s Rockstar and Paradise as well as AgriPro/Syngenta’s AP Bigfoot and SY Wolverine. Rockstar is the most popular and is having the best performance this year.

Only two producers have a few more truckloads to deliver and then harvest will be complete around Hill City in Graham County, according to Daryl Popp with Frontier Ag Inc. While harvest went well, acres in the area were down quite a bit, so total bushels taken in were also down substantially.

Popp reported harvest had a wide range between pretty good and pretty poor. Yields ranged from 89 bushels per acre to basically nothing, with most farmers averaging 35 to 45 bushels per acre. Proteins also saw a wide range from eight percent to 15 percent. While the average is sitting around 11 to 11.5 percent, Popp noted the elevator saw a lot more low protein wheat than high protein.

Test weights stayed excellent at 60 to 62 pounds per bushel, with a few loads coming in up to 64 pounds per bushel. Popp said that the main factor influencing the crop’s success or disappointment was rainfall, but crop rotations also played a major role in the crop’s development.

The Kansas wheat harvest is also finishing across the draw area of Skyland Grain, according to Matt Overturf, the executive vice president for grain marketing. Overturf is based in the Johnson location in Stanton County, but Skyland Grain covers a wide swath of the western portion of the state.

With a pretty big draw area, wheat harvest was truly a mixed bag. Overturf noted the southwest corner of Kansas was the worst — only cutting 25 to 30 percent of the crop. Dryland wheat, when not insured out before harvest, only yielded around 15 bushels per acre. It was not a good year for irrigated wheat either in this area with yields averaging between 50 and 60 bushels per acre.

In the northern part of the region, up toward Hamilton and north, dryland yields improved to 30 to 40 bushels per acre. The eastern portion of the draw area near Cunningham only took in two-thirds of a crop, but Overturf said it had excellent quality.

“We can’t complain about the quality across the area,” he said.

Overturf reported the western part of the state normally has some protein and this year’s levels are higher than normal. The wheat didn’t get a lot of help from Mother Nature and some areas west of Stanton County went more than 300 days without a rain event over a quarter of an inch.

Despite the impact of drought, he noted this year’s wheat should be a product that will find an end market from both domestic milling and export destinations.

“The Kansas crop is certainly a smaller crop than normal, but we’re going to have good domestic demand,” he said. “We just need some export demand to go with it.” 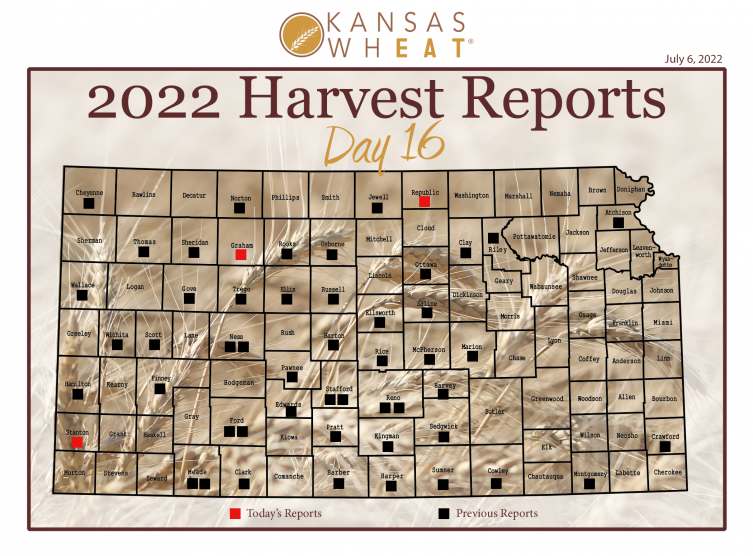