According to the USDA National Agricultural Statistics Service, Kansas winter wheat harvest is 96 percent complete, near 100 last year and 98 for the five-year average.

Erik Lange, Senior Vice President and chief operating officer, MKC, says their more than 40 locations across Kansas have taken in about two-thirds of their 5-year average on bushels, due to reduced acres because of the wet conditions last fall. MKC is located in 24 counties across Kansas, from Seward County in the southwest to Sumner County in south central to Pottawatomie County in the north east.

Lange reported that overall, harvest was about 2 to 2 ½ weeks later than normal statewide but a little less delayed in the west. He said yields varied widely across the state.

Test weights in the trade territory ranged from average to above average in most locations. There were a few places in central and south central Kansas that got some rains on mature wheat where test weights were slightly below average.

Proteins also varied by location. In the west, Lange reported that proteins were well below average, ranging from 10 ½ to 11 ½ percent, with spotted areas of 12s. In central and south central Kansas, proteins ranged from 10 ½ to 12 percent, which is above a normal average of 10 ½ to 11 percent.

Lange reported that most of harvest is wrapped up, but they are still waiting on mudholes. He said, “Spring was a battle. We appreciate the rain, but timing could have been better.”

He said acres that were planted late were not as good as the early planted. He predicts that acres may go up slightly in MKC’s trade territory this fall, but he is skeptical on how many acres that is, saying “If corn and beans come off in a timely manner, there may be some more wheat planted this fall. Weather played such a factor in acreage this year.”

Eric Sperber, GM/CEO at Cornerstone Ag, in Colby, said this was “one of the quickest harvests we’ve had in a long time,” reporting that they took in 95% of their receipts between July 10-19.

Sperber said this year’s harvest was about 1 ½ to 2 weeks late. They took their first load of wheat on July 3; their previous latest start date was July 1.

He said that yields were excellent in northwest Kansas, with customers calling it their “best crop ever” and a “once in a lifetime crop.” Test weights were also very good, averaging 61.5 to 62 pounds per bushel. He reports that the proteins were the lowest average he has seen in his 15 years with Cornerstone, averaging 10.7 percent.

Sperber said they took in more hard white wheat this year than in the previous three years combined. He said the majority of the hard white wheat was the Kansas Wheat Alliance variety Joe, and that farmers were pleased with Joe. Some farmers reported that they planted Joe last fall because of concerns about wheat streak mosaic virus and its resistance to the disease.

Acres in the area were largely unchanged from the past couple years, but still some of the lowest acres in recent history. Sperber reports that they took in about 125 percent of normal receipts, due to the excellent yields.

“It was an excellent harvest,” he said. “It was about the fifth best total receipts in the 15 years I’ve been here, on some of the lowest acres.” 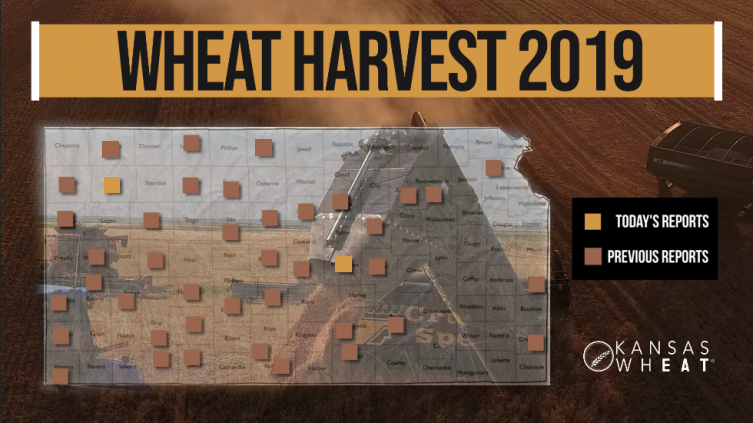