Kansas farmers made significant progress completing wheat harvest in the last week, including many who spent the holiday weekend in a combine cab. In the weekly Crop Progress and Condition report, USDA National Agricultural Statistics Service noted 83 percent of the wheat crop has been harvested as of July 3, well ahead of 59 percent last year and 65 percent for the five-year average.

Nathan Larson — a one-man show — just started cutting in Riley and Clay counties with his first load delivered to the elevator on July 1.

Larson is averaging about 40 bushels per acre on fields planted to LCS Chrome from Limagrain Cereal Seeds. Overall, Riley County is yielding a bit better around 50 bushels per acre. While he is happy with his fields considering the weather this year, he is concerned about recent rains bringing test weights down, a concern he has heard from several others.

Even though growing conditions have been a bit different this year, Larson reported his harvest schedule is very similar to last year. If the rain holds off, he anticipates he will finish up in just two more days.

Osborne County is now about 80 percent complete with harvest, according to Craig Mans, general manager with Midway Coop in Osborne. Before mid-harvest showers, test weights were averaging 63 pounds per bushel, but now have dropped to 59 pounds per bushel.

Yields range from 20 bushels per acre to 75 bushels per acre with wheat following summer fallow coming in significantly better. Protein is nothing special with the southern end of the coop’s territory above 12 percent and the northern end below 12 percent. Despite the mixed results, Mans noted wheat harvest is better than expected.

“Considering in April we didn’t even know if we would have a crop, most people are pretty happy,” he said.

Harvest in Sheridan County should also wrap-up by the end of this week, according to David Brooks with Hi-Plains Coop Association in Selden. The coop took in their first load on June 20, which puts harvest on a normal pace, thanks to newer combines and a slight decrease in wheat acres.

“Harvest is moving along with a break from a shower here or there that is very welcome,” Brooks said. “Overall, it’s going very smooth.”

Yields are averaging around 40 to 45 bushels per acre, but with a wide range from top to bottom depending on how much moisture the field received. The lowest yield so far was 1.1 bushels per acre from a field that received only 1.5 inches of moisture in the last 10 months. In contrast, the high yield thus far is 75 bushels per acre on wheat following summer fallow that caught some rain.

Protein has been average, but test weights have been excellent. The coop is averaging 61 pounds per bushel and test weights are staying steady even with little rains throughout harvest.

“Everything is going good, and everyone is pretty happy,” Brooks said. “We can’t ask for anything more than Mother Nature has given us.” 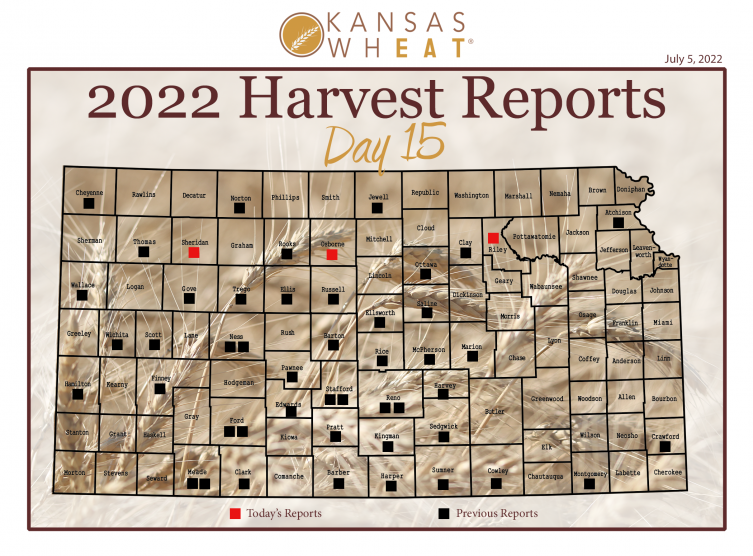