Farmers and crop specialists often joke that wheat has nine lives like a cat. The Kansas wheat crop certainly has used up a few of those lives this growing season, thanks to weather patterns and disease pressure, but producers and elevator managers are mostly happy with the bushels coming across the scales.

Based on July 1 conditions, Kansas' winter wheat production is forecast at 379.5 million bushels, up 35% from last year, according to the USDA's National Agricultural Statistics Service. Average yield is forecast at 55 bushels per acre, up 10 bushels from 2020. Area to be harvested for grain is estimated at 6.90 million acres, up 10% from a year ago.

Harvest across the northern tier of the state is catching up — thanks to warmer temperatures this past week. Across the state, USDA National Agricultural Statistics Service noted in the weekly Crop Progress and Condition report that 85 percent of the Kansas wheat crop has been harvested as of July 11, behind 93 percent the year prior and near 89 percent for the five-year average.

Anna Luna, location manager for Midland Marketing in Palco, reported the pace of this year’s wheat harvest feels more like fall harvest due to the mix of showers, high humidity and up-and-down temperatures that have slowed harvest progress. She noted harvest is now 90 percent complete in Rooks County.

Yields are all over the place — ranging from 30 to 85 bushels per acre — depending on when the crop was planted and if the field received moisture. Hail damage was not widespread but did catch a swath of fields around K-18 highway. Moisture has fluctuated with showers but has averaged in the mid-11s to 12 percent. Test weights have stayed pretty average at 58 to 60 pounds per bushel. No significant disease or dockage issues were present, thanks to area farmers who apply both seed treatments at planting and fungicide treatments in the spring.

“We’ve got great farmers that do a great job of spraying fungicide before flowering,” Luna said. “They put their fungicide on in May and every year we pick up more and more acres (to spray) because producers see the benefit.”

Despite the variability, Luna noted producers are excited about this year’s wheat harvest. With prices going up, she is seeing producers sell their crops across the scale to capture the additional value.

“Even though acres were down some, we had a pretty good crop across the board,” Luna said. “I’m excited to see where we end up at the end of harvest with bushels taken in.”

Harvest in Trego County, just to the southwest of Rooks, is further behind. Jason Rathbun with Frontier Ag Inc. in WaKeeney reported about 75 percent of the crop has now been cut. He estimated another six or seven days before harvest was complete in the area but expected this year’s crop to be better than last year’s.

Despite being behind, yields are good — ranging from 50 to 60 bushels per acre up to the mid-80s. Test weights started out above 60 pounds per bushel but dropped to 59 pounds per bushel after receiving rain. Protein levels are low on most loads at roughly 10 percent.

Wheat harvest also started late in Smith County, around June 26, but the end is in sight. Bruce Williams, CEO of Trinity Ag LLC in Smith Center, expected most folks to finish by Wednesday or Thursday.

Williams noted the area has not had heavy rains, but showers jumped up moisture levels and kept folks out of the field. Usually, producers were back in the combine by 3 or 4 in the afternoon but would have to shut down by 9 p.m. due to humidity levels.

Yields have been better than expected at roughly a 60-bushel-per-acre average with a range of 50 to 70 bushels per acre. Test weights have also been decent at 58 to 60 pounds per bushel. Williams noted proteins have not been wonderful, but he is hoping for an 11.5 percent average. Bushel-wise, Williams expected the crop to be about 15 percent better than last year, but about 10 percent behind the five-year average.

“Wheat certainly used all of its nine lives this year, and we still came out with a pretty decent crop,” Williams said. “All in all, a lot better than we expected in February and March.” 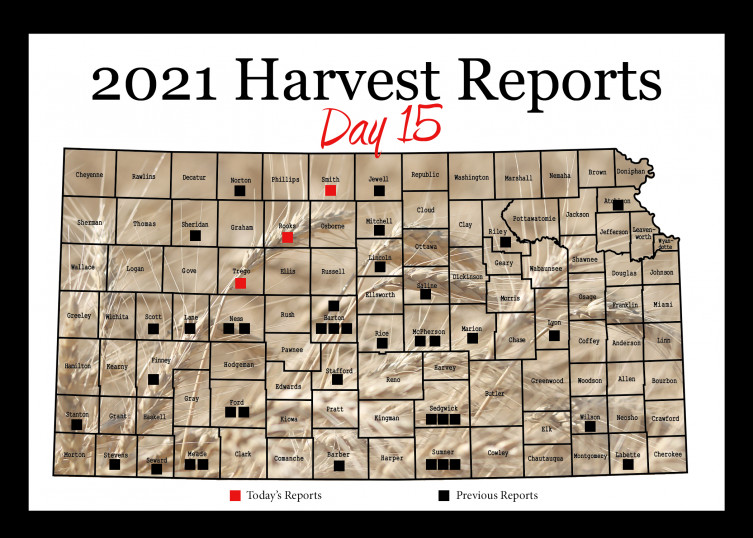