Kansas saw temperatures that were six to eight degrees above normal last week, according to the USDA’s National Agricultural Statistics Service.  Rainfall amounts of one inch or more were reported in southern and central counties, with lesser amounts in the northeast and northwest. The Wheat State saw 58 percent harvest completion at the end of last week, a statistic that was well ahead of the 37 percent seen at this time last year.

Gary Gantz from D.E. Bondurant Grain Co. in Ness City reported that the area is seeing an average yield that is pushing 50 bushels per acre. Test weights are averaging above 60 pounds per bushel and protein content is a little more than 11 percent. He estimates that the area is around 90 percent harvested.

“Our last good crop was in 2011,” said Gantz. “I think this is going to be double of what we have had the last few years.”

Karra James, Clay Center, said that her family finished harvesting on Friday. The James family saw yields in the 40-50 bushels per acre range, a slight decline from last year. Test weights were also good for the James family.

Jason Ochs, a farmer from Syracuse, said that his harvest this year is “way better” than the last few. He reported that he is seeing an average of 50 bushels an acre consistently in fields, and that test weights have held at around 63-64 pounds per bushel.

“I started farming full time in 2011 and the last five years probably averaged out to 15 bushels an acre,” said Ochs. “It’s nice to have my first ‘big harvest.’ I’m also excited that we’ll actually have residue for cover this year, which will help the future crops that we’ll have.” 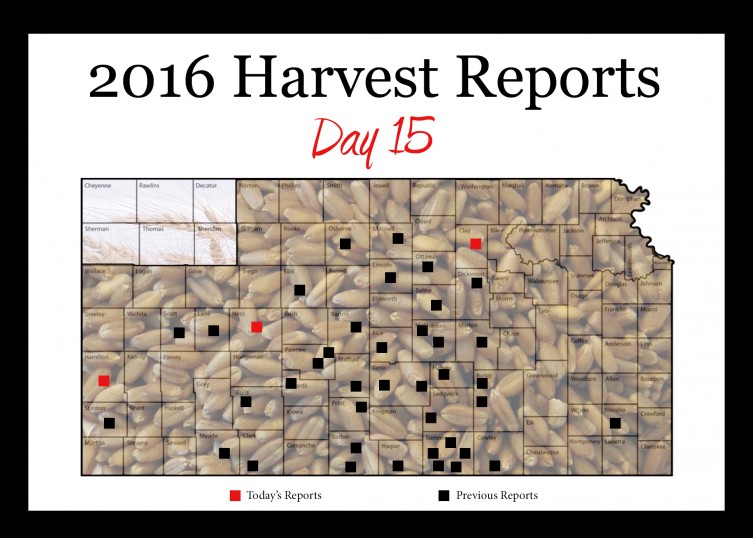