The central counties of Kansas are winding down the 2022 wheat harvest while northern counties are still in full swing. With rains predicted for the weekend, Kansas farmers are in the combine, the planter, the baler or the sprayer to get ahead of any fieldwork delays.

Mike McClellan started wheat harvest in Rooks County on June 23. His soybeans came off late last fall, and since all his winter wheat follows soybeans in the crop rotation, he planted 30 percent fewer wheat acres.

The wheat is pretty spotty, and most of the fields he has harvested so far have had at least some hail damage. As a result, yields range from 18 to 40 bushels per acre. Test weights are averaging 58 pounds per bushel on hail-damaged wheat up to 61 pounds per bushel. Protein is excellent at 13 to 16 percent.

KS Western Star, a Kansas Wheat Alliance variety, is yielding about five bushels per acre more than Doublestop CL Plus from Oklahoma Genetics, Inc. But, the KWA variety has slightly lower protein this year.

Admitting he wouldn’t mind a bit of a rain delay, McClellan expects to wrap up winter wheat harvest on Saturday. He’ll have another wheat harvest to come as he still has 500 acres of spring wheat.

A couple of more good days and everyone should be wrapped up in Ellsworth County, according to Riley Zamrzla, general manager of the Ellsworth Coop.

Yields in most places came in better than expected. Test weights started out heavy at 64 to 65 pounds per bushel, but then dropped to 58 pounds per bushel following rain. Protein was less than expected at 11 to 12 percent, which Zamrzla attributed to higher yields, indicating the crop wasn’t as stressed as thought.

Weeds are emerging due to the recent rain, so farmers are turning their attention to spraying stubble and other fields as they finish combining.

Recent sprinkles in Trego County also caused a dip in test weight, but area farmers are seeing a decent harvest, according to Lynette King, secretary with Frontier Ag Inc. in Wakeeney. Test weights started heavy, ranging from 63 to 66 pounds per bushel, but after a few sprinkles have dropped down to 61 pounds per bushel. King noted the area is not seeing a lot of protein and the coop is averaging 10 to 11 percent.

Harvest here is about 80 percent complete. Yields are anywhere from 10 to 15 bushels per acre for fields planted behind corn to an average of 45 to 50 bushels per acre. Farmers in the “garden spot” that received adequate moisture are yielding much higher.

Overall, the coop is looking at roughly a 50 percent reduction in volume for this year’s harvest with most farmers yielding in the 30’s bushels per acre range. Some folks received a nice surprise with yields higher than that range, which was unexpected.

The area did not have any measurable precipitation from October through the first of the year, so the wheat was really struggling and looking rough. But, some early summer rains and cool weather slowed down plant development and let kernels fill better. As a result, test weights are surprisingly good, averaging above 60 pounds per bushel. Protein has a wide range from 10 percent up to 13 percent.

“It was a good, safe harvest, and we are always thankful for that,” Penewit said.

In northeast Kansas, a dry March, cool April and wet May made for an excellent crop this year. Jay Armstrong, an Atchison County farmer, just finished his soft red winter wheat harvest on Thursday with a farm average of 83 bushels per acre. Test weights were over 60 pounds per bushel and kernels were large.

His soybean drill was right behind the combines with rain predicted for the weekend. More farmers are talking about planting wheat next year with area wheat farmers demonstrating a strong fertility and fungicide program can pay dividends followed by double-crop beans. 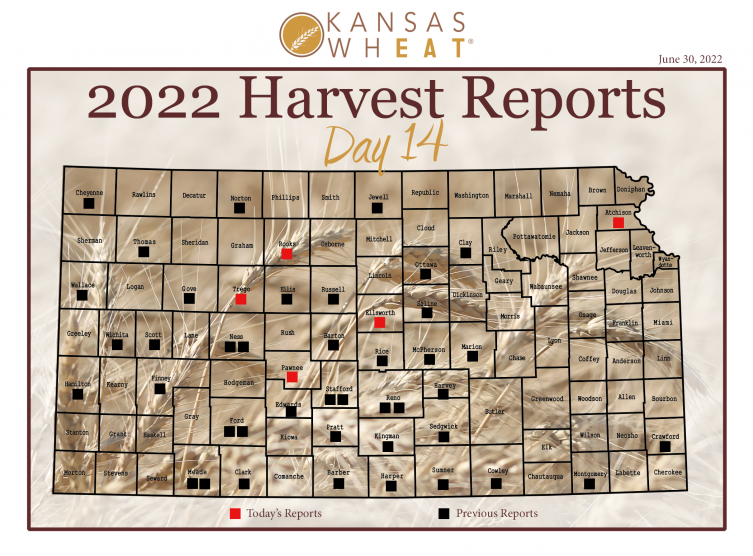