Rain seemed to be the theme nearly statewide over the weekend as combines came to a stop and other thirsty crops took a drink. #wheatharvest16 on Twitter shows an increasing number of Kansas farmers wrapping up their wheat harvest, while some farmers in northwest Kansas are chomping at the bit to get started.

Melanie Eddy, a farmer from Syracuse, reported that her family’s harvest has had a stuttering start with various rainfalls in the last week. However she said that her family still has 10 days left of cutting, provided that they get the dry weather to do it.

Yields have averaged around 70 bushels an acre, a total that has been unheard of in the area for the last several years.

“I think we had one year where we averaged 12 bushels an acre, thanks to the drought,” said Eddy. “I’m sure that if you added up the last five years’ worth of averages you wouldn’t even hit 70 bushels an acre.”

Beloit farmer Michael Jordan reported having a grim outlook for this year’s harvest, but that all changed thanks to some well-timed rains.

“We weren’t really expecting much of a crop at all,” said Jordan. “We only had about one inch of precipitation from the beginning of the year to the end of April, so we were sure it was a gonner. Then we got 15 inches of rain in five weeks, so now it’s not too shabby, even with some hail damage.”

Jordan said that one field was averaging 71 bushels an acre, even with 20% hail damage.

Ken Wood, a farmer from Chapman, reported that his fields he has been able to harvest have been better than average.

“The real story down here is that harvest was very slow going this year,” said Wood. “A lot of the wheat was knocked over flat on the ground, and there was even some green looking wheat, so we’ve had to chew through it all.”

“We weren’t able to harvest some areas of fields just because there were too many large pieces of debris; it just wasn’t worth it,” said Wood. “The area in the vortex of the tornado looked like it had already been harvested by a stripper header; the heads had just ripped off.” 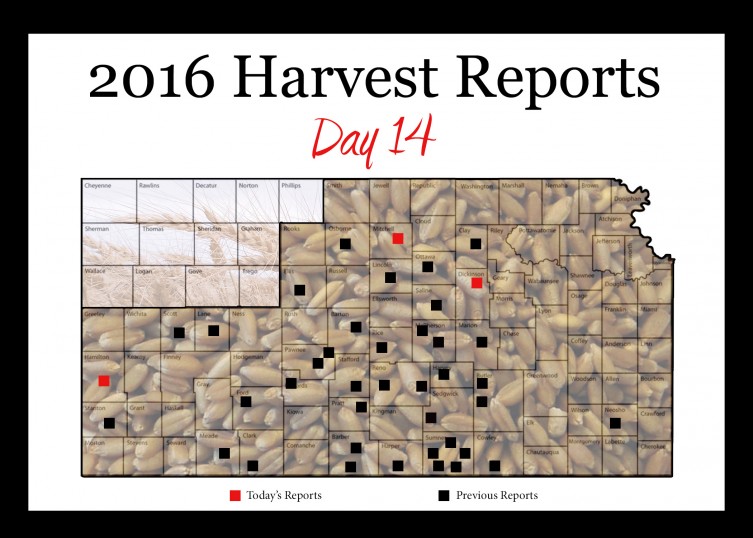