About two weeks behind schedule, wheat harvest in Kansas is progressing quickly with high temperatures this week about 100°F in northwest Kansas.

According to Larry Glenn, of Frontier AG Inc. in Quinter in Gove County, harvest is 85-90% complete in the area. Glenn reported that yields are above average in the western third of the state. Harvest was delayed and started out slow, but then moved very quickly.

Glenn said they started paying protein premiums last year and added protein testers in all locations. Protein is averaging about 10.5%.

Storage is an issue in the area, with the bunker in Quinter full. They are getting some rail cars in to start moving grain as the elevator space gets tight.

“We’ve been blessed with rains in this area,” Glenn said, adding that the rains didn’t come too much at a time like other areas. While there was some hail, it was spotty and didn’t cause widespread damage.

“We are well above last year on bushels, which was a good year,” Glenn said.

Larry Snow of Heartland Mills in Marienthal in Wichita County, reports that yields are way above average, but proteins are way below, estimating high 10s for most of the organic wheat they buy. Fortunately for the mill, they have been able to source higher protein wheat from other areas in the high plains.

“There will be a lot of 8s and 9s that would take too much to blend up, so it will end up as organic feed wheat,” said Snow. He said that harvest has been about two weeks late and is nearing completion. He added, “Test weights are really good.”

Ken Wood, who farms near Chapman in Dickinson County, wrapped up wheat harvest this last Saturday. Wood said they had good yields that were on higher ground in the fields and some lower yields where water stood for a longer period of time. Wood says they don’t test proteins, but they had solid test weight numbers for the year.

“I was pleased with the outcome that we had this year. It turned out better than we expected,” Wood said. 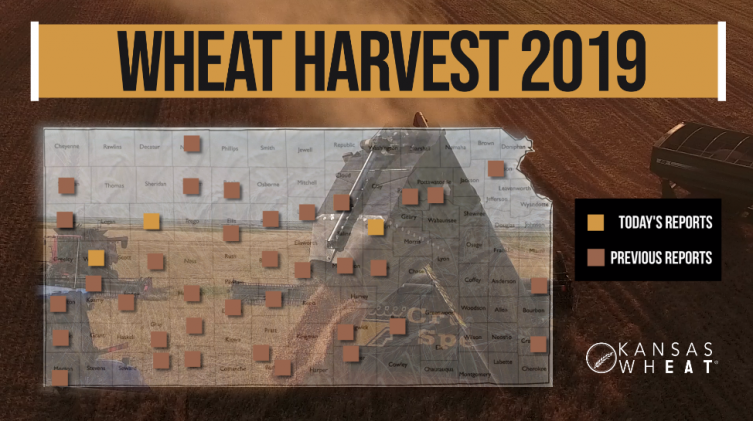