Mike Jordan, who farms in the Beloit area in Mitchell County, started harvest on June 24. Usually by now Jordan is wrapping up harvest but due to 3-7 inches of rain in the county, he was forced to push back harvest till the fields were able to dry out. Rain stretched all the way down to the southwest corner of Mitchell County, causing many other farmers to be delayed as well. Farmers are now back in the fields, harvesting in full swing in hopes to be done this weekend. Protein levels are showing anywhere from 11.5-12.4%, which is below last year. This year’s crop was slow maturing; the most ideal time to harvest would have been July 4. Yields are ranging from 32 to 58 bushels per acre in the area. Jordan has harvested the Kansas Wheat Alliance variety Zenda and WestBred varieties WB-Grainfield and 4303. Much of his focus was on 4303 because the heads set in an extra row of kernels, but those were also damaged by the severe freeze in the spring. Each of these varieties are all yielding very similar, with test weights ranging from 56 to 61 pounds per bushel.

Mike McClellan of Plainville in Rooks County started harvest on July 1. In a normal year they start as early as June 20, but high moisture levels kept them out of the fields longer than they anticipated. Protein levels are ranging from 10.5 to 13.5%. From the seat of his combine, McClellan reports average to low yields. This has been a strange year for this part of Kansas in terms of weather. They were faced with freezing weather, high temperatures and moisture. McClellan predicts that this year farmers may see more of a difference in weather factors rather than varieties. KWA’s Tatanka and WB-Grainfield are both producing average yields for him.

Frontier Ag in Ogallah in Trego County took in their first load on June 23. So far, they have brought in 250,000 bushels, with yields being average at 40 bushels per acre and ranging from 20 to 60. Protein is averaging 12%. This year farmers were able to start on time, and currently 40% of the wheat has been harvested. They hope to finish anywhere from July 10 to 15, as long as there aren’t any interruptions from the weather.

Jack Farber with Frontier Ag in Collyer in Trego County reports that they took in their first load on June 30. Harvest was delayed by rain. They have taken in 400,000 bushels, and yields are low, anywhere from 30 to 65 bushels per acre. Proteins have ranged from a low of 9% to highs of the mid-15s. The area is about halfway done with harvest and should be complete in about a week. On Thursday, farmers were challenged with fog, making it hard to get into the fields to cut. This entire crop year has been a challenge, as much of the wheat didn’t emerge until late February. This will be an average year, much lower than last year’s record-setting harvest. 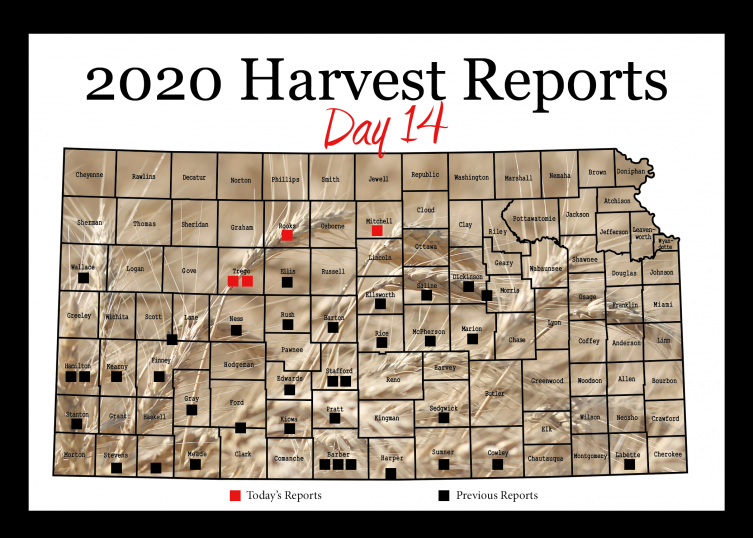