Harvest continues to roll through northern Kansas as farmers try to pick up the pace to make up for some lost time. Yields continue to be highly variable throughout the state, with some areas seeing double the county averages, while others are making 25-30 bushels per acre. Pockets of protein continue to be reported in localized areas of the state.

Lynn Moore, a farmer near Pittsburg, finished wheat harvest about two weeks ago. Moore says they had solid yields throughout harvest, and test weights ranged in the upper 50’s.

“It was unexpected for wheat harvest to go as well as it did, but we are just glad it is done and out of the field,” Moore said.

Dell Princ, of Midway Coop Association in Osborne County, reported that they are in the final stages of their wheat harvest this year.

“These are some of the best yields we have seen, considering the year we have had,” Princ said. With solid test weights and proteins ranging from 11-11.5%, Princ is pleased with this year’s harvest.

Chris Tanner, a farmer near Norton, reported that he began his harvest on July 4th (when they normally finish up) but had to press pause for rains until July 12. He is currently about halfway done. He estimates that this year’s county average is in the mid-50s, with some acres seeing upwards of 90 bushels an acre, but others averaging only 25 bushels per acre. Tanner says that fertilized fields are yielding much better, and that proteins in the area are ranging from 10.5-11%. Test weights are 61-63 pounds per bushel. The Syngenta/AgriPro variety Bob Dole is performing very well for Tanner.

“Weather made it difficult to get wheat drilled, and a lot of guys got it in late,” said Tanner. “Spring moisture made it hard to get fertilizer on. Everything has been a fight for us -- calving, spraying, planting and overly saturated soils.” 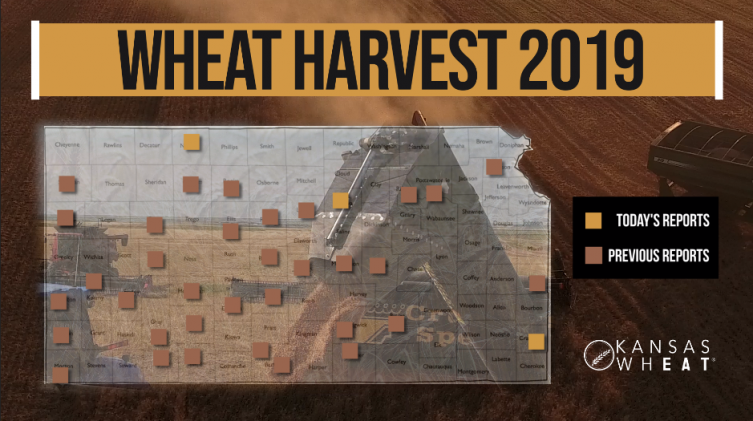