Dean Stoskopf, who farms in Barton County, was able to start off harvest on June 25. Even though this year’s harvest was a week late compared to last year’s, harvest has been running smoothly, and he has high hopes of finishing up on July 2. Yields are averaging in the low 50s and ranging from 35 to 65 bushels per acre, making it an average crop. Barton County was lucky enough to be missed by an area hailstorm but was hit with some heavy windstorms, which caused the crop to shatter.

Lisa Schemm, who farms in Wallace and Logan counties, reports that they are finished with wheat harvest. They took in their first load on June 26, and only had a total of 176 acres this year. Throughout the surrounding areas, about 70% of the wheat is harvested. Schemm’s crop averaged 12.9% protein and test weight was 62.2 pounds per bushel. This year, harvest was able to start right on time with no weather causing impacts or damage to the crop. One thing that Schemm did differently this year was to use dry fertilizer on the wheat, which, in her opinion, seemed to help.

Golden Belt Coop Association of Ellis started this year’s harvest on time by taking in their first load on June 17. They have taken 550,000 bushels in so far. Yields are ranging anywhere from 20 to 50 bushels per acre, with 70% of the wheat harvested in the surrounding area. Farmers are hoping to be done with harvest by July 5, weather permitting. This season’s crop was down from last year by 20% due to the amount of freeze damage they received.

According to General Manager Daren Fischer, “We are lucky to have any wheat, as cold as the temperatures were. I am surprised — any other year, it would have got all of it, but I’m not sure how it survived.” Some wheat was able to survive by either having a shelter belt or a wind block.

In Herington, Kansas Agri Trails Coop is just getting started. They received their first load on June 26.  They have received 50,000 bushels of wheat so far, and it is averaging 10-11% on the protein. Harvest was late getting started because of harsh weather. 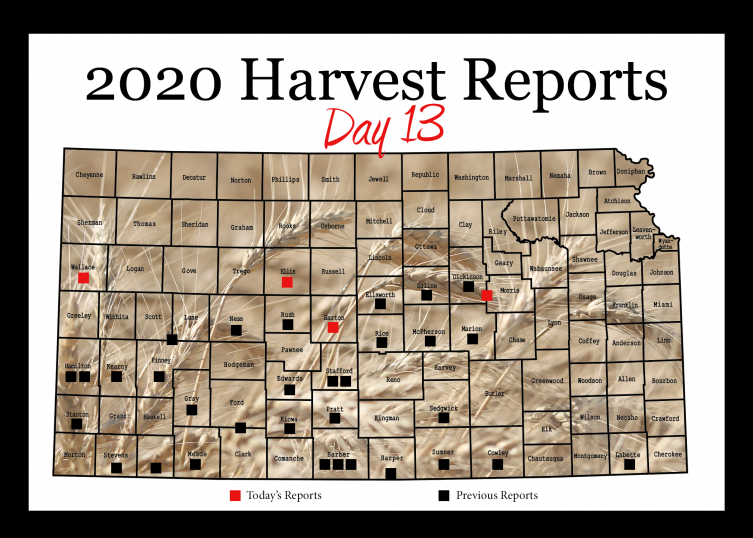