Trevor Cox, field agronomist, with Central Valley Ag Co-op in Clay Center, reported that harvest began in their area on June 23. Moisture is consistent at 12 percent, but yields are all over the board. Some of the low ground froze and saw yields in the 20 and 30 bushel per acre range, but some of the better wheat is yielding in the 50s and 60s.

Cox said test weights are good, in the low 60 pounds per bushel. Proteins are highly variable, with most around 12 to 13 percent, but the highest so far was 17 percent. Some farmers have already wrapped up their harvest, and the rest of the area should be complete by next week.

Tyler Crosson from Crosson Family Farms near Minneapolis in Ottawa County, reported that their farm is averaging just under 40 bushels per acre. The wheat that was planted early is yielding only in the 20s bushels per acre, but the later planted is doing better, in the 40s. Protein is ranging from 12 to 13 percent. Test weights are ranging from 57 to 62 pounds per bushel.

Crosson said he is finishing his own wheat on June 28, but then he will head to Jewell County to custom cut for a friend. He is going to plant sunflowers after his wheat because of current sunflower demand and prices. They will be sent to Lamar, Colorado.

Mark Bosse, owner of MJB Harvesters from Grainfield, started harvest on May 21 in Haskell, Texas, where conditions were much worse than what they’ve seen in Kansas. The custom harvest crew has been in Kansas for eight days so far and will be here another 10 days or so.

In a field of T-158, Bosse was cutting 50 to 60 bushel wheat near his home in Gove County on June 27. The farmer was in the next field over, and said it was excellent quality, with protein averaging 12 to 13 percent and a test weight of 63 pounds per bushel.

With rain forecasted over the coming weekend, he said it was worth it to hire a harvesting crew to get the wheat out of the field before rains lowered the test weight.

“If we lose test weight from the rain, it pays for the harvester,” he said.

Bosse said he has been harvesting wheat in this area since 1990, when the average yield was 30 bushels per acre. While there are fewer acres of wheat now, yields last year were in the 80s. Even this year with hardly any rain, yields are near 60, Bosse said, attributing the increase to improved genetics and soil conservation practices.

Eric Sperber, general manager/CEO of Cornerstone Ag LLC in Colby, reported that June 27 was their first full day of harvest, although a few loads started trickling in last week. This is several days earlier than harvest began the last couple years.

Proteins are ranging from 8 to 16 percent with good test weights. The average so far is about 12 percent, which is in line with their average the last few years.

Test weights are 58 pounds and above, but Sperber expects that to improve as farmers start cutting better fields. While the wheat is short, it got some late growth which will improve stubble for the upcoming year. He said several area farmers have chosen to invest in stripper headers to increase their residue left behind.

Sperber noted that most producers topdressed their wheat, while fungicide applications were way down. There isn’t much disease in the area, with no rust to speak of and very little wheat streak mosaic virus.

Sperber said there’s a lot more irrigated wheat this year, but it doesn’t look a lot better than the dryland wheat. Irrigated wheat is short this year as well, noting “one more moisture event would have helped.”

“We are just the highest priced wheat in the world,” he said, “To find new demand has been difficult.” 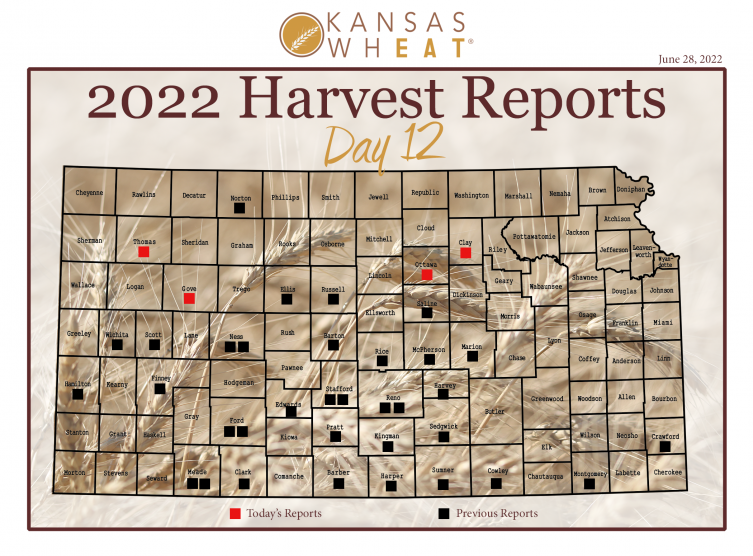