Patrick Egging from Kanza Coop Assn. in Pratt reports that harvest began on June 15. With the weather cooperating and bringing in dry and hot temperatures, farmers were able to start harvest only a couple days later than normal. Throughout harvest they have brought in a total of 460,000 bushels of wheat with proteins sampling in the high 10s. As of right now, farmers are at the 90% range when it comes to completing harvest, though they plan to hopefully be done in the next couple of days. Comparing to an average year, bushels have gone down for Kanza Coop Assn., but in an overall look at the county it is more of an average year.

Gary Gantz from D.E. Bondurant Grain in Ness City reports that harvest began on June 18 and has been going full swing, with about 90% already harvested. Average yield is ranging from 35 to 45 bushels per acre. Proteins early on in harvest were low with better than expected yields, but as harvest has progressed protein levels rose and yields dropped.

“We are trying to separate the protein here, and it seems like we are finding some that we are able to group in 12% and above and then the 11% and lower,” said Gantz. “I would say there is an equal amount of each.”

This year Ness City received a hard hailstorm, causing a loss in a couple hundred thousand bushels of production. There were several farmers in this area that were not able to cut any wheat and several farmers whose fields were damaged very severely. Farmers were in hopes that their production would be up this year from last, but overall production is down. This is due, in part, to the hailstorm, but was also caused by an overabundance of dryness in the fall, winter and spring. Many fields around this area are now doing double crops, where their wheat is being planted behind corn, making it more challenging for the best production.

Justin Knopf, who farms in Saline County, was able to start harvesting on June 24. A majority of farmers in the area have passed the halfway point of harvest. With weather cooperating this year, he was able to start harvest on time. Protein levels range from 10 to 13%, with a vast majority in the 12s. When it came to outstanding varieties, Knopf said there was more variability based on planting date and impact of freeze than there was from variety performance.

“We were very fortunate to have good grain fill conditions, which helps mask some of the damage done from the Easter freeze on some of our earlier planted wheat,” said Knopf. “Some of those fields I had anticipated on being in the mid-30s are doing better than I had imagined, producing closer to the 50s range. Overall, our yields are average compared to long term; some fields are running a little above average. These fields are showing better production than I would have imagined 2 months ago.”

In Rice County, Doug Keesling was able to start harvest and take in the first load on June 25. Due to rainfall right before harvest, they were delayed five days more than last year. Even though they were delayed, harvest is right on track. They are 75% finished and have only two more days in the field. This year’s test weights have been good, and the crop is yielding well, compared to previous years. Some varieties that stood out were AgriPro’s Bob Dole and Kansas Wheat Alliance’s Zenda. 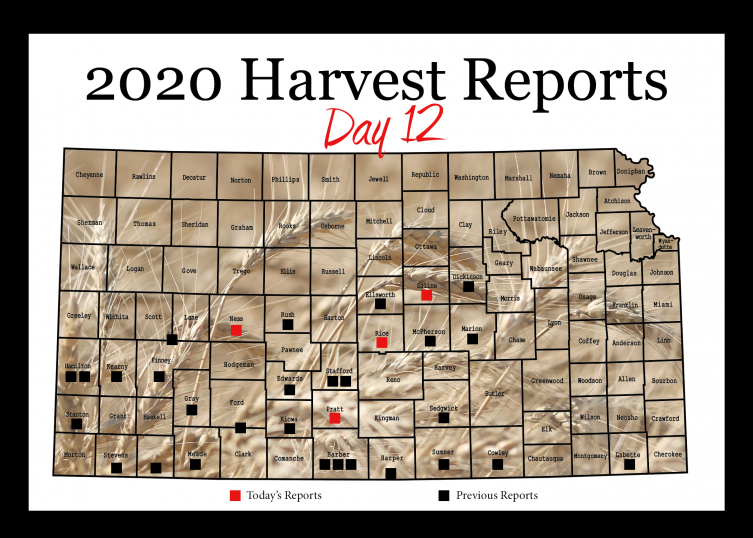