Based on July 1 conditions, USDA’s National Agricultural Statistics Service forecast the Kansas 2015 winter wheat crop at 334 million bushels, up 36 percent from last year’s crop. Average yield is forecast at 38 bushels per acre, up 10 bushels from last year. It is a good increase from where prospects looked in late April, when the crop was forecast at only 272 million bushels. The word “variable” best describes yields, test weights and proteins. Test weights in Kansas continue to average 58-60 pounds per bushel. Proteins are variable, but look to be 12-12.5% on average. As of July 12, 93% of the Kansas wheat crop was harvested according to USDA/NASS.

Chris Tanner’s wheat near Norton did not have a good year, damaged by spring freeze, resurrected with May rainfall and stricken with stripe rust.

“The wheat was about two days from dying of drought when we hit the wet spell,” Tanner said. “Then the rust came in bad when the flag leaf was fully emerged.”

On the tail end of harvest, Brad Hobelmann, Belleville, says this year’s wheat is quite a bit better than last year and up 30 to 50 percent. His yields have been running in the mid 20’s to low 50’s with test weights averaging 58 to 60 pounds per bushel.

The most frustrating issue for Hobelmann in north central Kansas has been dealing with moisture levels and getting the wheat to ripen.

“The cooler weather combined with some winter kill set the wheat back, so we had a lot of late green heads,” said Hobelmann.

After finishing his harvest a little less than a week ago, Michael Jordan, Beloit, had some time to reflect on his 2015 crop. While this was a slightly below average year for Jordan, he made it clear that it was a much better year than last year’s “disaster.”

“While we were running a little short than our normal average, everything was better than last year,” said Jordan. “Everything turned out better than we had predicted in April.”

Test weights were lighter than normal, with many tickets showing 58-60 pounds per bushel. Jordan attributes that, and a harvest delay, to an abundance of secondary tillers that popped up after the later rains. Although Jordan’s harvest was slightly below the middle of the road, he had talked to eastern neighbors and found they had their best year ever, while his western neighbors had among their worst.

“20 miles either way made a huge difference,” said Jordan.

In far northwest Kansas, Doug Ross of the St. Francis Mercantile Equity Exchange, reported yields and test weights in the area are “all over the board.” Outliers in the yields have been 10-80 bushels per acre, while test weights have ranged from 50-64 pounds per bushel.

The area’s wheat hasn’t had it easy this year after surviving winterkill, late freezes, hail and disease. Late season rains helped “save” the area’s wheat. Proteins are averaging around 11.5 percent.

“I think we’ll be wrapped up by this weekend,” said Ross. “And that’s a good thing.”

The 2015 Harvest Report is brought to you by the Kansas Wheat Commission, Kansas Association of Wheat Growers and Kansas Grain and Feed Association. 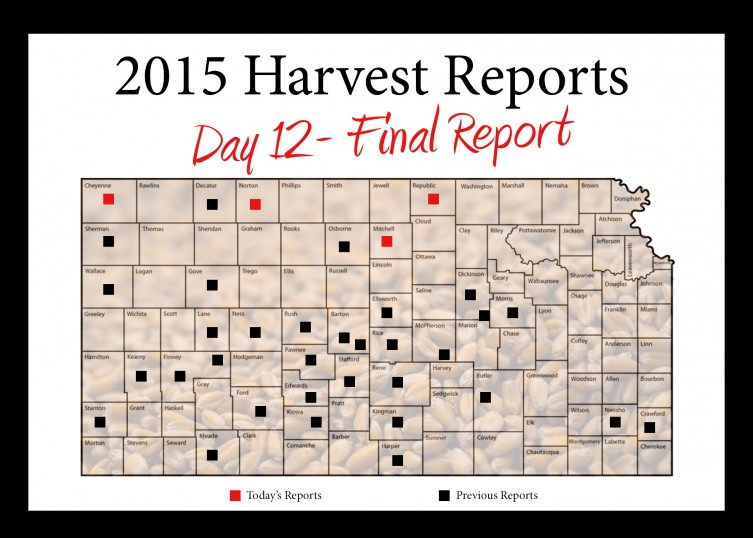