Inquiring minds — from farmers to elevator managers and end-use customers — want to know what impact the wet weather is having on the 2021 Kansas wheat harvest. Beyond slowing down the progression of harvest by keeping farmers out of the field until the late afternoon most days, sprinkles and seemingly random showers are increasing moisture levels, lowering test weights, and just making the wheat harder to combine. Elevators are working with farmers to keep deliveries open when and where they can cut.

At the start of harvest, moisture was at 10 percent and test weights were excellent, running above 60 pounds per bushel for the whole crop — with several fields hitting 64 pounds per bushel. Yields are variable, depending on whether the field emerged in the fall or in February — due to dry conditions at planting. Yields in late-emerging fields are making in the high 30s to low 40s, while fields that emerged as they should in the fall are making in the 50s.

Farmers in McPherson County were also delayed or off to a late start Wednesday, according to Adam Butler, the senior location manager in Moundridge for MKC. While wheat harvest is 90 percent complete in the area — having started around June 15 — continuous waves of rain since last Friday followed by spotty, sporadic rains is holding up that last bit of cutting.

Before and after the wet weather, moisture has stayed consistent at roughly 11 to 12.5 percent. Yields are averaging near 45 bushels per acre, ranging from the mid-30s to the mid-60s. Proteins are highly variable from less than 10 percent to higher than 14 percent. Butler said the wheat overall has looked really clean this year with little field damage present.

MKC strategically placed bids this harvest to encourage farmers to deliver directly to the Canton location, so wheat could be loaded out quicker on rail rather than being delivered to Groveland — also in McPherson County — and then trucked to Canton. As a result, the Groveland location has taken in half of its normal haul, but the Canton location has loaded out seven trains in 10 days.

Schmidt said wheat harvest in this area started on June 17 and kicked into full swing on June 20. To date, the wheat harvest is now 65 to 70 percent complete, but persistent, sporadic rains are hindering farmers from finishing out their harvest. Moisture levels for harvest started at nine percent for the first week and a half, but now are averaging around 14 percent following the rain.

Even with delays, he expected the wheat crop to end up better than average, with some farmers reporting yields in the range of 70 to 90 bushels per acre. Test weights started out averaging 62 pounds per bushel but are now coming in at 59 to 60 pounds per bushel. To date, Schmidt said he has seen no significant disease or dockage issues but is keeping a close eye out for any sprouting issues following the summer storms. 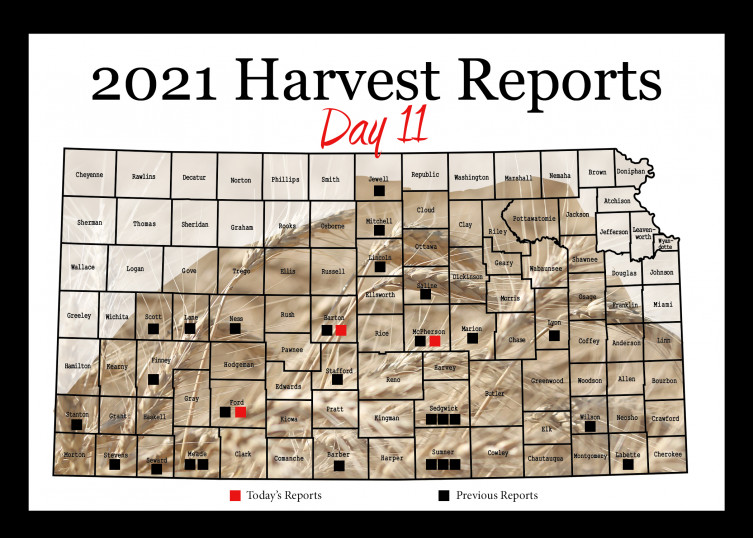