Dwight Elmore from Ellsworth Coop reports that they took in their first load on June 17, and their harvest is only about 1/3 complete. They received rain in some areas, which has delayed harvest, and they also have signs of hail damage. Yields have ranged from 20-70 bushels per acre in a single field. Most of the reason for such low bushels can be traced back to freeze damage in this area. Proteins levels are around mid-11 to 12%. Comparing this year to an average year, Elmore said, “We will be somewhere close to where we were in a 5-year average.” This year’s harvest was able to take off earlier than they had anticipated. He said, “This year was better than last year, but they were still hoping it would have been earlier yet.”

Mike Britton from Mid State Farmers Coop in Rush County said they took in their first load of wheat on June 19, and are hoping to be on the downhill slide by this Friday. Some farmers are reporting that it is yielding better than they expected. Proteins are running anywhere from 9 to 14%, with a majority in the 11s and 12s. Britton says this year’s numbers are looking great and may possibly be a little better than last year.

Steve Kliewer, who farms in Gray County, reports that he lost about a third of his acres to hail. He started cutting on June 19, but the ground was a little too wet. He is now 80% done and is expecting to be wrapped up by July 2. He said proteins have been above average at 13-14%. Test weights are 61-62 pounds per bushel. Dryland wheat in the area didn’t emerge until February because there was no rain last fall. His best dryland yields are in the 45 bushels per acre range. The best irrigated yield was about 78, which is below average.

“I didn’t expect much more than that,” said Kliewer. “It didn’t look like a good irrigated crop by any means.” His irrigated fields were Dyna-Gro Seed’s Underwood and Longbranch varieties.

“Last year was a real good crop everywhere,” he said. This year has been the opposite. “It has just been a challenge from the word go. More hail than ever — had to replant cotton and corn. Then it got hailed out again. It’s just a challenge.”

Derek Sawyer, who farms in McPherson County, reports that he took in his first load on June 24 and will probably finish mid-week. Harvest has moved quickly, but yields are inconsistent and he’s heard that proteins in the area are below average. Doublestop CL Plus from Oklahoma Genetics Inc. has been his best variety.

He said that his fields are averaging in the low 60s, which is better than last year when they had a lot of wheat that was flooded out and average yield was only 45. Test weights haven’t been good, ranging from mid to upper 50s. The hot wind the area received a couple weeks ago really hurt the wheat. It wasn’t quite done, and it shriveled.

“We had more freeze damage than I thought. I didn’t think we had much,” Sawyer said. “Overall, it’s disappointing. For the weather we had, it’s probably not bad, but I was hoping we’d be better.” 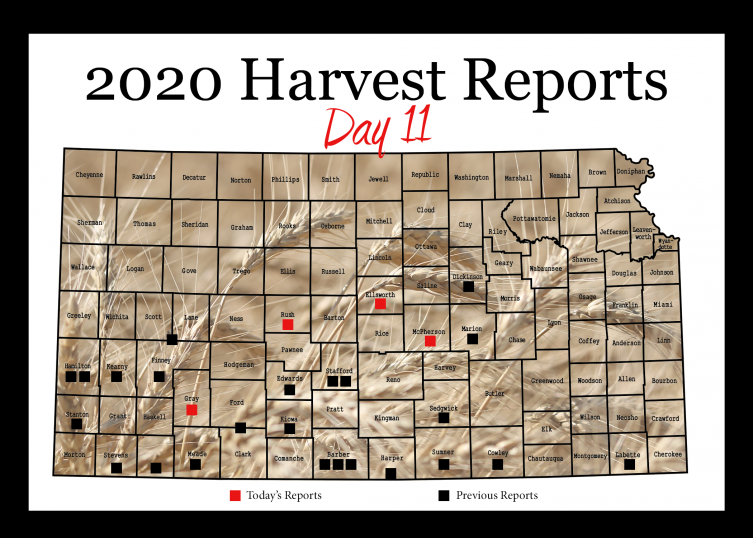