Between rubber boots, umbrellas, frizzy hair and the occasional mud puddle splash, rain, for many Americans, is seen as an inconvenience. Farmers, however, see the value in the life-sustaining substance. During the Kansas wheat growing season, farmers hoped and prayed to get moisture, and while it didn’t come in the desired quantities, the soil moisture, the small amounts given over the growing season and new wheat genetics helped to prop the Kansas wheat crop up into harvest. Now that farmers are ready to roll the combines, Mother Nature comes to the rescue with widespread rains that are too late for the wheat crop, but are good news for fall crops.

Kyler Millershaski, a Kearny County farmer, said, “I don’t want to complain because rain isn’t something we complain about too often out here. I was hoping that we would be pretty close to wrapping up our harvest by now, but instead we’re just getting started.”

Millershaski reported that he and his family cut all last Monday and Tuesday, but it’s been raining just enough to keep their machines parked ever since. He also added that over Saturday and Sunday, they had received more than two inches of rain, an amount that was around a third of the total moisture their wheat received during the entirety of the growing season. The acreage that Millershaski has cut had test weights running from 62-63 pounds per bushel and about at county average yields. While Millershaski thinks it’s a bit too soon to give out exact yield estimates, he did add that he is “just happy to be cutting an average wheat crop with above average quality.”

Millershaski added that test weights will probably drop with the rains, and he estimates that harvest will continue for his family until July.

“We won’t be done by the Fourth of July, which is a bummer, but at least I don’t have to worry about making plans,” said Millershaski.

Rains have also kept Josh Debes, a Barton County farmer, out of the fields since Friday. Debes reports that he and his family were about three-quarters harvested, but he may not get into the fields very soon. Meteorologists are predicting a storm in Debes’ area that could mean over an inch of rain overnight Sunday night.

“I haven’t started complaining yet because we have been in desperate need,” Debes said. “While the wheat won’t benefit, our other crops, pastures and ponds needed it badly.”

Yields for Debes have varied, but he estimates his final average will be about 50 bushels per acre.

“Some fields had just enough rains at just the right times to produce well,” said Debes. “But others are still producing what we expected in April.”

Debes reports test weights ranging from 60-65 pounds per bushel, but added that number will probably drop after the extended rains. Proteins in the area are ranging from 11-13 percent and he estimates that he has 2 to 2 1/2 solid days of cutting left, if Mother Nature allows him in the fields.

Debes planted two varieties this year, KanMark and WB-Grainfield. While WB-Grainfield tends to have better yields, Debes noted that KanMark has brought better test weights and proteins and has dried down evenly, making it easier and quicker to harvest. 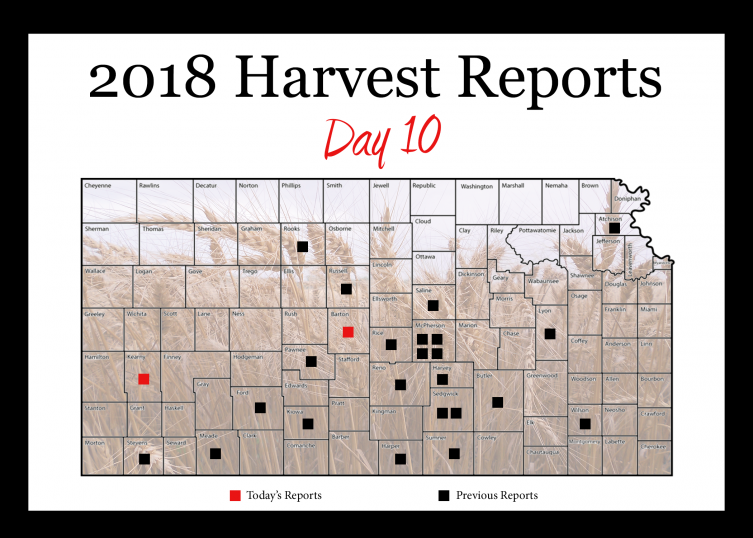