Ken Wood who farms near Chapman in Dickinson County, reports that he started harvest on June 24. Yields have been highly variable because of freeze damage and a large rain event Memorial weekend that drowned some of the wheat out. He said, overall yields are a little better than he expected. The Easter freeze had varying effects on his fields. Some were not hurt at all and others lost 20 to 30 bushels per acre from freeze damage. Test weights have ranged from the low 50s on some freeze damaged wheat and places where water stood to 61 on some of the better fields. He has 5-10% more acres than last year, and reports that his average yield will be slightly better when you factor in the fields that yielded 0 last year due to flooding.

Ron Suppes who farms in Lane, Scott and Finney counties, says he is pleasantly surprised with average yields of 45-50 bushels per acre, especially since most of his wheat didn’t come up until February or March. The Kansas Wheat Alliance variety KS Venada is performing well. Suppes and his son grow all hard white wheat, and their proteins are ranging from 12-14%. Test weights are ranging from 57-60 pounds per bushel. Even though yields are slightly better than predicted, they are still only half of last year’s yields.

His son Shayne agrees. He said this is only their second year with KS Venada, but it yielded 60-65 bushels per acre. He said KWA’s Joe is also a solid variety, with a little better test weight.

“Last year was one of our best harvests, in terms of yield, and this year will be one of our worst,” Shayne said. “But at least the grain quality is good.”

He attributes these decent yields in a tough year to a number of factors, including soil health from no-till practices, which allows the ground to take harsher conditions; farming practices, such as use of stripper headers that leave more residue in the fields; getting timely rains and improved genetics.

“Getting a timely rain makes all the difference,” he said. “And, we have never had genetics like we have now.”

They began wheat harvest on June 24 and it typically lasts 12-14 days. 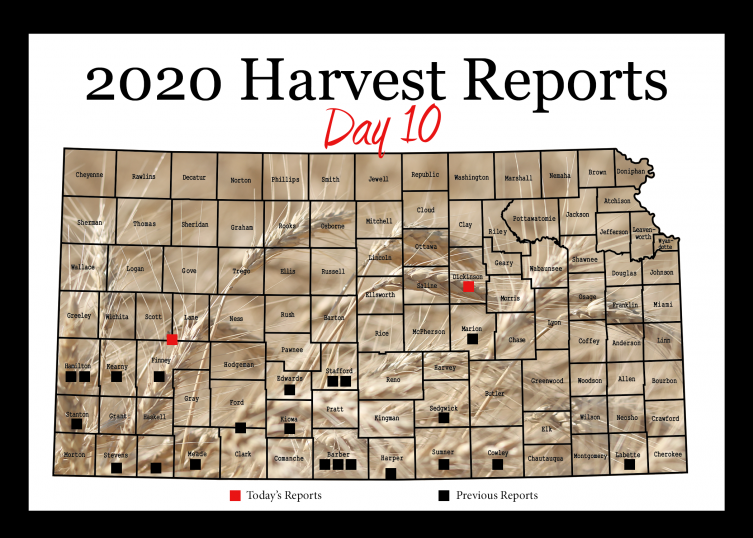