The combines have just started to roll in south central Kansas, and variability is the name of the game for the 2022 wheat crop thus far.

Loads started trickling in on Thursday and Friday in Danville, but harvest kicked into steady gear in Harper County over the weekend, according to MKC vice president Jason Brown.

Brown noted early loads were from wheat pasture, meaning stands were pretty thin, but growers are now cutting better fields. Yields are expected to average between 30 and 40 bushels per acre, but early fields have ranged from 16 to 60 bushels per acre. Test weights are a little light — averaging 57 to 58 pounds per bushel — but also getting heavier as more fields are cut. Protein is reflective of drought stress with samples averaging between 12 and 14 percent.

Yield variability is also the most striking characteristic of harvest in Barber County, according to David Gaddis, general manager of OK Coop Grain Co. in Kiowa. The first load arrived at the elevator late on Friday, but Monday, June 13, was the first real day of harvest. Moisture is plenty dry at 11 or 12 percent, but yields swing from 18 to 50 bushels per acre.

Gaddis noted the wheat crop is good-looking so far, with above-average proteins and test weights at 59 to 60 pounds per bushel. Overall, he said it’s a typical drought-stressed crop with late rains that helped fill smaller berries and keep some fields from being total disasters.

“Like most things in life, it’s highly variable,” Gaddis described the start of the 2022 wheat harvest. “It depends on what rains you caught and when you planted it.”

Late rains gave the boon of filling berries, but have also caused delays in Reno County. Still, Matt Long, MKC senior location manager, said harvest is kicking off four to five days earlier than usual in the area. The first loads arrived at the Castleton location on Saturday, which has taken in about eight loads or 8,000 bushels so far.

Yields from these early fields are coming in as expected at mid-30s to low-40s bushels per acre with protein higher than normal due to drought stress. Despite thinner stands, quality is good, likely due to recent timely rains, with test weights over 60 pounds per bushel.

“As you drive around the countryside, it’s hit or miss,” Long said, noting that the fields coming in now were mostly double-cropped and he expects this year’s harvest to stretch out.

With two percent of the Kansas wheat crop harvested as of June 12, according to the USDA National Agricultural Statistics Service’s weekly crop progress and condition report, time will tell where the average yield, test weight and protein will fall as harvest marches onward. The report noted 31 percent of the wheat crop was mature as of June 12, ahead of 16 percent last year and 25 percent average. Statewide, the agency rated the wheat crop’s condition at 26 percent good to excellent, 33 percent fair and 41 percent poor to very poor. 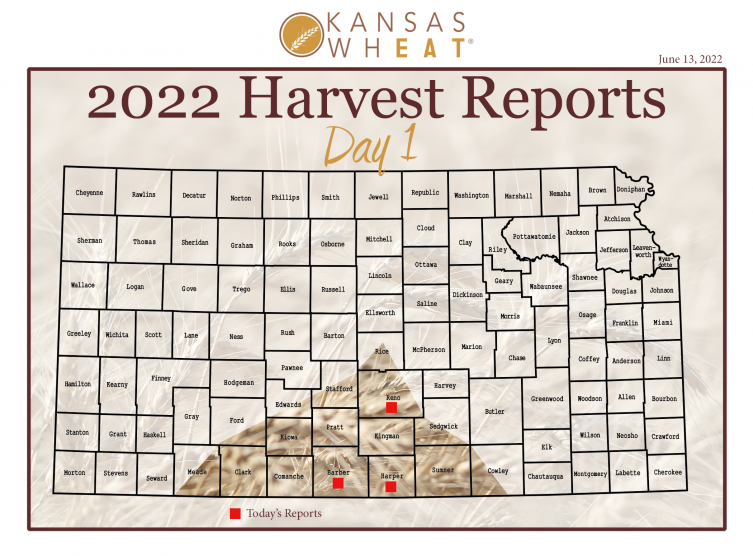