The iconic chalkboard filled with lessons on policy and life alike has been erased for the final time following the loss of Dr. Barry Flinchbaugh on Nov. 2. Kansas Wheat joins his generations of students - both in the classroom and in life - in celebrating Flinchbaugh’s legacy of agricultural policy work, industry guidance and personal mentorship.

Flinchbaugh joined the faculty at Kansas State University in 1971 after earning a doctoral degree in agricultural economics from Purdue University and bachelor’s and master’s degrees from Penn State University. He taught thousands of students across three generations in his 400-level course in agricultural policy each fall. He delighted in comparing grades between parents and children who had both taken his class and was quick to offer assistance and mentorship.

Dean Stoskopf, wheat industry leader from Hoisington, took Flinchbaugh’s class in 1976, back in the days when students furiously writing essay questions would see a cloud of green smoke float over their shoulders as Flinchbaugh smoked cigars in class. From the very start of his teaching career, he says the professor pushed students to look objectively at issues instead of automatically taking one side or another.

Stoskopf was one of many that Flinchbaugh would push to get involved in organizations like the Kansas Association of Wheat Growers. He assisted these up-and-coming “whipper-snappers” to work through fundamental differences between the Kansas Association of Wheat Growers and the Kansas Wheat Commission and transition to the current era of unified leadership. He also pushed for Kansas wheat farmers to assume larger leadership positions and take advantage of strong and strategic roles for Kansas political leaders at the highest levels of government.

“We all have wonderful memories of Dr. Flinchbaugh,” said Ron Suppes, wheat farmer-leader from Dighton. “Twice he recognized me personally, including when he introduced me to an audience and called me one of his students - which I wasn’t. And the second when he asked me to run for Congress. Both times I was more than humbled. I will truly miss him.”

With unabashed wit and unapologetic insight, Flinchbaugh was a titan in shaping agricultural policy. In Kansas, he campaigned for use value appraisal for agricultural property and spoke against severance taxes among many other issues. Nationally, he was involved in every U.S. farm bill written since 1968 and was an advisor to countless boards, advisory groups and task forces in addition to dozens of speaking engagements each year. He served as the chairman of the Commission on 21st Century Production Agriculture, which was authorized in the 1996 Federal Activities Inventory Reform, or FAIR, Act, also known as the Freedom to Farm Act.

Despite this prestige, Stoskopf and his wife Mary Anne remember how they would often spot him chatting with farm hands, family members or tour guides during trips with fellow wheat farmers to Europe, Cuba and the Pacific Northwest. In this way, he was not only agriculture’s greatest teacher, but also one of its strongest listeners, taking in ideas and insight from all sides and all levels.

“Flinchbaugh obviously knew more about the ins and outs of government policy than anybody else, but he also found those other angles to provide context to what was being discussed,” said Mary Anne Stoskopf. “People were comfortable talking with him at all levels, from ministers of policy down to the regular people in the workforce.”

Flinchbaugh was a huge supporter of the wheat industry. The Ag Policy Office at the Kansas Wheat Innovation Center was named after him, with his donation to the future of wheat research through the Kansas Wheat Commission Research Foundation.

Flinchbaugh will be remembered for his lessons, his leadership and his mentorship of countless members of the agricultural community. Our hearts are with his wife Cathy and his family as he is laid to rest in a private family burial. A celebration of life is expected to follow after the COVID-19 pandemic. 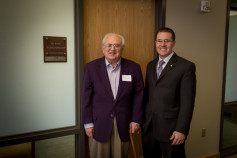 “Many of you will remember him for his work on farm policy, but I’ll remember him at least as much for his ability to hit me across the room with a marker when I wasn’t quick enough erasing the whiteboard for him in AGECON 410,” said Dalton Henry, vice president of policy at U.S. Wheat Associates and former Flinchbaugh teaching assistant. “Like many others, I owe an awful lot of where I am to the good doctor. The world will sorely miss his willingness to call it like he saw it, refusal to give into petty politics and his belief in the students who took his class.”

Memorial contributions may be given to the Flinchbaugh Undergraduate Scholarship Fund or the Flinchbaugh Ag Policy Chair, both in care of KSU Foundation, 1800 Kimball Avenue, Suite 200, Manhattan, KS 66502-3373 or online at www.ksufoundation.org.