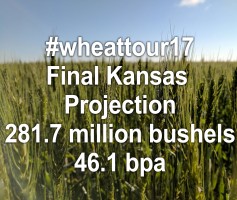 The 2017 Wheat Quality Council’s Hard Winter Wheat Tour across Kansas wrapped up on May 4, as scouts traveled from Wichita to Manhattan.

The three-day average over the fields that were calculated was 46.1 bushels an acre. While an estimated 7.4 million acres of wheat were planted in the fall, tour participants saw many areas where disease, damage from snow and freeze damage may eliminate those fields. This was accounted for in the final estimates.

The official tour projection for total production numbers of hard red winter wheat to be harvested in Kansas is 281,707,913 bushels. If realized, this would be 185 million bushels less than last year’s crop. This number is calculated based on the average of estimated predictions from tour participants who gathered information from 469 fields across the state. The number of stops was down significantly from 655 fields during the 2016 tour. This was due primarily to snow cover in the western third of the state, where tour scouts weren’t able to take calculations.

“The tour provides a formula for us to use and a component of that formula is row space and height of wheat plant and being able to count the number of stalks or heads in one foot,” said Kansas Wheat’s Aaron Harries, VP of Research and Operations. “In the area where snow had flattened the wheat, we’re just not able to do that. So, it was our decision not to try to estimate yields on those fields. Rather, we’ll would just look at them and take notes. There’s no way we can possibly accurately determine a yield. We’d only be guessing, so we just aren’t including those fields in the average we’re doing for western Kansas. We’re able to find some fields where we can determine those things, and we’re using those fields as part of our average.”

The Hard Winter Wheat tour is sponsored by the Wheat Quality Council. This year's tour hosted 70 participants from five countries and 24 states in 18 vehicles while traveling across the state on six routes. While winter storm Ursa crippled the western third of the state over this past weekend, there was no way to delay the tour. Instead, tour participants made any possible observations as a snapshot in time, but the industry will continue to watch what happens in central parts of the state with potential freeze damage and how the wheat responds once the snow in western Kansas melts.