“It’s too early to tell,” was the theme of day 1 of the 2017 Wheat Quality Council’s Hard Winter Wheat Tour across Kansas.

About 70 scouts left Manhattan early Tuesday morning, May 2, and made their way east to west across the state, ending up in Colby by evening. The average yield for the day between 18 cars and 222 stops was 43 bushels per acre. This was down from 47.1 bushels per acre over the same area last year.

Wheat looked good early in the day, with adequate moisture and little disease pressure or damage.

But as the cars made their way into central Kansas, participants started seeing some of the effects of the April 22-23 and April 27 freezes that affected a big portion of the middle of the state.

These freeze events have been overshadowed in the news by a blizzard that affected the western third of the state over the weekend of April 29 through May 1.

However, the freezes may cause significant damage in many areas because the crop was in boot and early heading stages at the time. The extent of that damage doesn’t fully show until a week to 10 days following the event. Scouts reported that more than half of the wheat they saw on day 1 was in the boot stage and 39% was headed. According to the National Agricultural Statistics Service, as of April 30, 44% of the wheat was headed statewide.

Wheat tour scouts also noted some disease pressure in central parts of the state, including stripe rust, which is a devastating fungal disease.

Kansas Wheat CEO Justin Gilpin recommends that farmers invest in fungicides to control the rust issues. “Later maturity wheat and wheat after soybeans have good yield potential. I’d encourage farmers to work with their crop consultants and consider applying a fungicide,” he said. 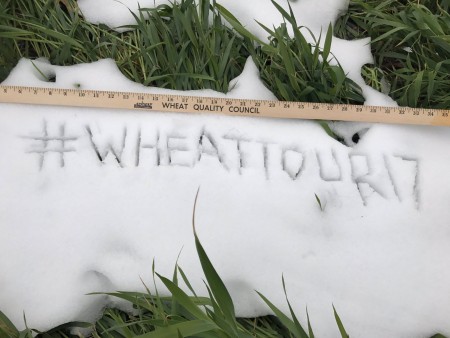 Throughout the state, tour participants noted a lot of mud, but as the groups headed farther west, they ran into fields with snow cover, beginning around Norton and Graham counties. They noted additional disease pressure – most significantly Wheat Streak Mosaic Virus, barley yellow dwarf virus, leaf rust and stripe rust – and also noticed some nitrogen deficiency, and some aphids, as evidenced by beneficial ladybugs.

The weight of the weekend’s heavy snow laid the wheat over on its side, which is something the wheat can likely recover from – if the stems aren’t broken. With snow still covering many of the fields, it’s too early to estimate what percentage of the plants have irreparable damage.

This loss of a portion of the crop comes at a tough time for wheat farmers. The ag economy is not faring well, and bushels are a necessity to offset low prices. A weather-related crop disaster forces these Kansas food producers to rely on the strong farm safety net that is provided by crop insurance in the farm bill.

Farmers should note that if your wheat crop was affected by any of the freeze or snow events, it’s critical to notify your crop insurance agent as soon as possible, even if you aren’t able to fully evaluate its true damage or recovery potential.

The tour continues through May 4, heading from Colby to Wichita and back to Manhattan. You can follow along with participants, who will continue tweeting results straight from the field using #wheattour17.