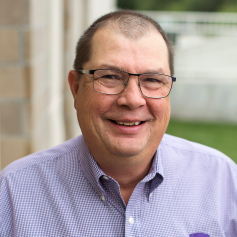 Mike is a second generation wheat commissioner who farms in North West & North Central Kansas.  His diverse no-till operation consists of wheat, corn, grain sorghum and soybeans,  He has included safflowers, sunflowers and oats as part of his rotation.  Mike was a member of KARL Class IV.  He is Past President of Plains Grain Inc. and is involved with the Wheat Quality Council and U.S. Wheat Associates.  He is married to Tammy McClellan.  They have four daughters.