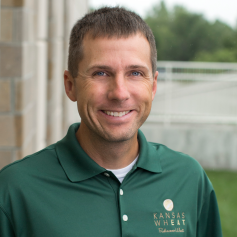 Knopf says this is a defining moment for the wheat industry. “The wheat industry is being re-defined thanks to renewed interest in wheat research by private companies, the start of public and private collaborations, and increasing demand for food,” he says. “It is important to gather input from other wheat producers and communicate their interests and my own to provide direction and input on the future of the wheat industry.”

Knopf is active in the Kansas Farm Bureau and the Central Kansas Extension District. A 2000 graduate from K-State, Justin is married to Lindsey; they have three children.