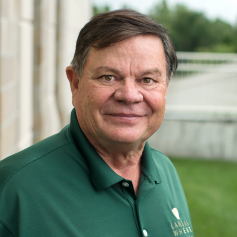 Jay Armstrong is a second generation Commissioner, following the footsteps of his father, John. On his farm near Muscotah, he grows wheat, corn and soybeans. In his spare time, Jay enjoys flying and achieving high golf scores. He has been a Kansas Wheat Commissioner since 2007, representing Districts 7, 8 and 9 in eastern Kansas.