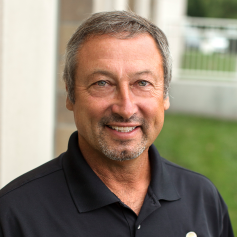 Gary Millershaski served on the Kansas Association of Wheat Growers from 2007 to 2017. He became a Kansas Wheat Commissioner in 2016. He became interested in joining KAWG after he received a scholarship from the organization while a member of KARL Class VIII. As a director, Gary enjoys having the ability to network with other wheat producers at national conventions and uses their vast wealth of knowledge of the wheat industry to stay up-to-date as a farmer. On his farm, he grows predominately wheat, but also raises dryland corn, milo and has a cow/calf operation. Gary, and his wife Jana, have two boys,  who have come back to the farm. Gary admits his sons keep him young with annual trips to Colorado to go snowboarding. They each have a motorcycle of their own and enjoy getting away from the hustle and bustle of the farm for a weekend trip.