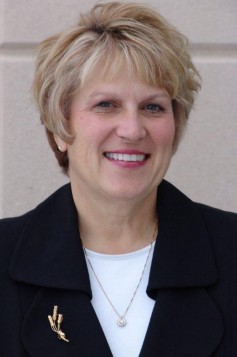 Cindy Falk began at the Kansas Wheat Commission in 1985 as a volunteer "Speak for Wheat" spokesperson and part-time nutritionist from 1989 to 1994. Cindy is responsible for developing the annual KWC Recipe booklet, providing educational programs and supervising the spokesperson program. Since 1990 Falk has served as Co-Chair and Chair of the Kansas Festival of Breads baking contest and is currently Chair of the National Festival of Breads baking contest. Since 1993, Falk has served on the national Wheat Foods Council Executive Board and in 2002-2003 was Chairman. She earned a B.S. in Human Ecology from Kansas State University. In 2004, she was the recipient of the "Friend of Extension Family and Consumer Sciences" award. In 1994, Falk received the "Wheat Woman of the Year" award. Falk grew up on a farm in North East Kansas. She still resides there with her husband and enjoys spending time with their four adult children and grandchildren. Her hobbies include swimming, gardening, traveling and baking.